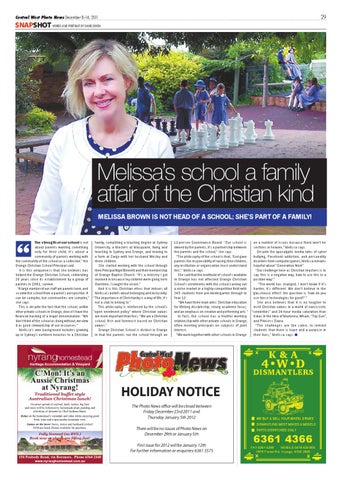 Melissa’s school a family affair of the Christian kind Melissa Brown is not head of a school; she’s part of a faMily!

The strength of our school is not about parents wanting something only for their child; it’s about a community of parents working with the community of the school as a collective,” the Orange Christian School Principal said. It is this uniqueness that she believes has helped the Orange Christian School, celebrating 30 years since its establishment by a group of parents in 1981, survive. “A large number of our staff are parents here, and so view the school from a parent’s perspective. It can be complex, but communities are complex,” she says. This is despite the fact that the school, unlike other private schools in Orange, doesn’t have the financial backing of a major denomination: “We don’t think of the school as doing without, we view it as good stewardship of our resources.” Melissa’s own background includes growing up in Sydney’s northern beaches to a Christian

family, completing a teaching degree at Sydney University, a Masters at Macquarie, living and teaching in Sydney and Orange, and moving to a farm at Cargo with her husband Wesley and three children. She started working with the school through then Principal Nigel Bennett and their membership of Orange Baptist Church: “It’s a ministry I got involved in because my children were going here. Overtime, I caught the vision.” And it is this Christian ethos that imbues all Melissa’s beliefs about belonging and inclusivity: “The importance of Christianity is a way of life; it’s not a club to belong to.” This philosophy is reinforced by the school’s “open enrolment policy” where Christian values are more important than fees. “We are a Christian school, first and foremost based on Christian values.” Orange Christian School is distinct in Orange in that the parents run the school through an

11-person Governance Board: “Our school is owned by the parents, it’s a partnership between the parents and the school,” she says. “The philosophy of the school is that, ‘God gave parents the responsibility of raising their children; any institution or organisation must understand this’,” Melissa says. She said that the multitude of school’s available in Orange has not affected Orange Christian School’s enrolments with the school carving out a niche market in a highly-competitive field with 340 students from pre-kindergarten through to Year 12. “We have three main aims: Christian education for lifelong discipleship; strong academic focus; and an emphasis on creative and performing arts.” In fact, the school has a fruitful working relationship with other private schools in Orange, often meeting principals on subjects of joint interest. “We work together with other schools in Orange

on a number of issues because there won’t be sections in heaven,” Melissa says. Despite the apocalyptic media tales of cyberbullying, Facebook addiction, and personality disorders from computer games, Melissa remains hopeful about “Generation Next”. “Our challenge here as Christian teachers is to say ‘this is a negative way, how to use this in a positive way’.” “The world has changed, I don’t know if it’s harder, it’s different. We don’t believe in the ‘glasshouse effect’ the question is ‘how do you use these technologies for good?’.” She also believes that it is no tougher to instil Christian values in a world of narcissistic “celebrities” and 24-hour media saturation than it was in the time of Madonna, Wham, “Top Gun”, and Princess Diana. “The challenges are the same, to remind students that there is hope and a purpose in their lives,” Melissa says.

The Photo News office will be closed between Friday December 23rd 2011 and Thursday January 5th 2012 There will be no issues of Photo News on December 29th or January 5th First issue for 2012 will be January 12th For further information or enquiries: 6361 3575

A great read every week.