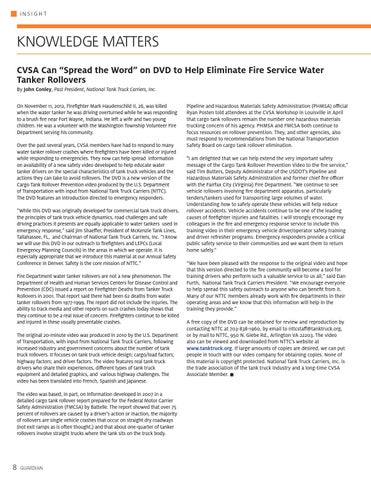 KNOWLEDGE MATTERS CVSA Can “Spread the Word” on DVD to Help Eliminate Fire Service Water Tanker Rollovers By John Conley, Past President, National Tank Truck Carriers, Inc. On November 11, 2012, Fireﬁghter Mark Haudenschild II, 26, was killed when the water tanker he was driving overturned while he was responding to a brush ﬁre near Fort Wayne, Indiana. He left a wife and two young children. He was a volunteer with the Washington Township Volunteer Fire Department serving his community. Over the past several years, CVSA members have had to respond to many water tanker rollover crashes where ﬁreﬁghters have been killed or injured while responding to emergencies. They now can help spread information on availability of a new safety video developed to help educate water tanker drivers on the special characteristics of tank truck vehicles and the actions they can take to avoid rollovers. The DVD is a new version of the Cargo Tank Rollover Prevention video produced by the U.S. Department of Transportation with input from National Tank Truck Carriers (NTTC). The DVD features an introduction directed to emergency responders. “While this DVD was originally developed for commercial tank truck drivers, the principles of tank truck vehicle dynamics, road challenges and safe driving practices it presents are equally applicable to water tankers used in emergency response,” said Jim Shaeﬀer, President of McKenzie Tank Lines, Tallahassee, FL, and Chairman of National Tank Truck Carriers, Inc. “I know we will use this DVD in our outreach to ﬁreﬁghters and LEPCs (Local Emergency Planning Councils) in the areas in which we operate. It is especially appropriate that we introduce this material at our Annual Safety Conference in Denver. Safety is the core mission of NTTC.” Fire Department water tanker rollovers are not a new phenomenon. The Department of Health and Human Services Centers for Disease Control and Prevention (CDC) issued a report on Fireﬁghter Deaths from Tanker Truck Rollovers in 2001. That report said there had been 62 deaths from water tanker rollovers from 1977-1999. The report did not include the injuries. The ability to track media and other reports on such crashes today shows that they continue to be a real issue of concern. Fireﬁghters continue to be killed and injured in these usually preventable crashes. The original 20-minute video was produced in 2010 by the U.S. Department of Transportation, with input from National Tank Truck Carriers, following increased industry and government concerns about the number of tank truck rollovers. It focuses on tank truck vehicle design; cargo/load factors; highway factors; and driver factors. The video features real tank truck drivers who share their experiences, diﬀerent types of tank truck equipment and detailed graphics, and various highway challenges. The video has been translated into French, Spanish and Japanese. The video was based, in part, on information developed in 2007 in a detailed cargo tank rollover report prepared for the Federal Motor Carrier Safety Administration (FMCSA) by Battelle. The report showed that over 75 percent of rollovers are caused by a driver’s action or inaction, the majority of rollovers are single vehicle crashes that occur on straight dry roadways (not exit ramps as is often thought,) and that about one-quarter of tanker rollovers involve straight trucks where the tank sits on the truck body.

Pipeline and Hazardous Materials Safety Administration (PHMSA) oﬃcial Ryan Posten told attendees at the CVSA Workshop in Louisville in April that cargo tank rollovers remain the number one hazardous materials trucking concern of his agency. PHMSA and FMCSA both continue to focus resources on rollover prevention. They, and other agencies, also must respond to recommendations from the National Transportation Safety Board on cargo tank rollover elimination. &quot;I am delighted that we can help extend the very important safety message of the Cargo Tank Rollover Prevention Video to the ﬁre service,&quot; said Tim Butters, Deputy Administrator of the USDOT&#39;s Pipeline and Hazardous Materials Safety Administration and former chief ﬁre oﬃcer with the Fairfax City (Virginia) Fire Department. &quot;We continue to see vehicle rollovers involving ﬁre department apparatus, particularly tenders/tankers used for transporting large volumes of water. Understanding how to safely operate these vehicles will help reduce rollover accidents. Vehicle accidents continue to be one of the leading causes of ﬁreﬁghter injuries and fatalities. I will strongly encourage my colleagues in the ﬁre and emergency response service to include this training video in their emergency vehicle driver/operator safety training and driver refresher programs. Emergency responders provide a critical public safety service to their communities and we want them to return home safely.&quot; “We have been pleased with the response to the original video and hope that this version directed to the ﬁre community will become a tool for training drivers who perform such a valuable service to us all,” said Dan Furth, National Tank Truck Carriers President. “We encourage everyone to help spread this safety outreach to anyone who can beneﬁt from it. Many of our NTTC members already work with ﬁre departments in their operating areas and we know that this information will help in the training they provide.” A free copy of the DVD can be obtained for review and reproduction by contacting NTTC at 703-838-1960, by email to nttcstaﬀ@tanktruck.org, or by mail to NTTC, 950 N. Glebe Rd., Arlington VA 22203. The video also can be viewed and downloaded from NTTC’s website at www.tanktruck.org. If large amounts of copies are desired, we can put people in touch with our video company for obtaining copies. None of this material is copyright protected. National Tank Truck Carriers, Inc. is the trade association of the tank truck industry and a long-time CVSA Associate Member. n

A Publication of the Commercial Vehicle Safety Alliance 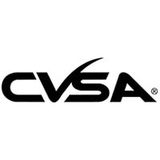