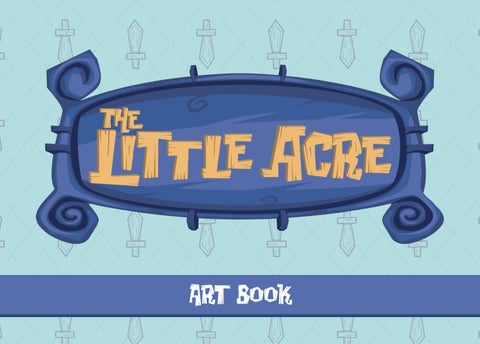 “Hey Chris! We should make a beautiful looking adventure game where everything is hand animated and painted. Imagine bringing this classic Don Bluth style to modern consoles and platforms.” “Sounds like a great idea Ben!” “Can you draw?” “No… can you?” “No…” “But it can’t be that hard. I’ll throw together some sketches and see where we get.” “...let’s get some artists.”

Not experienced the adventure yet? The Little Acre is available for digital download on PC and Consoles

Pewter Games Studios was founded in 2013, and is based in Dublin, Ireland. The Little Acre is their ďŹ rst title. If you don&#39;t like mild spoilers we strongly recommend that you go and complete The Little Acre ďŹ rst. We won&#39;t accept responsibility for your curiosity.

Early sketches of the farmstead. The environments of The Little Acre are designed with camera movements in mind. We plot out the focal points of the area at this early stage.

A storyboard of The Little Acreâ&amp;#x20AC;&amp;#x2122;s opening cutscene

Early sketches of the Illusion Monster

All our animations begin with a rough sketch like this one of Adian getting out of bed. Here weâ&amp;#x20AC;&amp;#x2122;re looking to get the right feel and movement for each step of the action.

All our animations begin with a rough sketch like this one of Aiden getting out of bed. Here we’re looking to get the right feel and movement for each step of the action.

Once the action is working we then make another pass. Here any mistakes in the drawing are ﬁxed – a missing eyebrow or a crooked hand for instance.

Finally, the drawings are coloured and shaded.

A family reunion - the animation process from concept to completion.

Multiples, as the name implies, involve making multiple drawings of the character or a part of them on the same frame. This also helps to give the impression of speed. For example, if a character fumbles with an object and they frantically move to grab it, the animator might draw four or ďŹ ve hands for a few frames.

The denizens of ClonďŹ ra charted by size

Thank you for checking out The Little Acre art book (not to mention also buying the game)! This was the ﬁrst title that our studio has ever shipped, and as such we put in a lot of care and a lot of work, and learned a whole lot along the way. Hopefully you can see some of this through the artwork above! The Little Acre’s animation was hand-drawn, which means that every frame is a separate drawing. We used this technique for all the characters, as well as most of the eﬀects in the game. It was pretty labour intensive, but we were left with something visually unique and interesting, and to us that made it all worth it. One of the things you’ll probably notice is how there are two art styles to the game, due to the nature of how we wanted to convey the idea of travelling to another universe. What this meant was that we needed two versions of the main characters – one standard, and one isometric. The isometric world is also where things get stranger, sometimes being described as a ‘Miyazaki’ world. While this was a nice idea which helped us emphasise the fact that Aidan and Lily weren’t in Kansas anymore (in case it’s not obvious, they were never actually in Kansas), it also ended up causing a headache for the animators who had to create the 8-directional movement animations required for Aidan and Lily - twice. Nevertheless, they managed to pull it oﬀ and the game is better oﬀ for it. Just don’t be surprised if we don’t do anything that stupid in future. We&#39;d like to thank our artists so much for all their hard work on bringing The Little Acre to life. Also, on behalf of everyone at Pewter Games thank you for supporting us. Really, you da bestest.

THE ART BOOK: Experience the art of The Little Acre from early sketches to the finished product. Learn how the artists of Pewter Games developed their work and get a peek at what they make for fun on the side. THE LITTLE ACRE: The Little Acre follows the story of Aidan and his daughter, Lily, set in 1950’s Ireland. After discovering clues as to the whereabouts of his missing father, Aidan begins investigating until he inadvertently finds himself transported to a strange new world. Ever the hero, Lily sets off after him, encountering her own perils along the way. Featuring full voice-acting and hand-drawn animation, The Little Acre is a memorable, lovingly crafted adventure game.