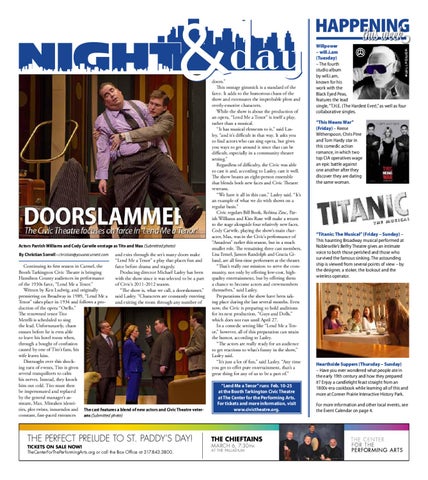 and exits through the set’s many doors make “Lend Me a Tenor” a play that places fun and farce before drama and tragedy. Producing director Michael Lasley has been with the show since it was selected to be a part of Civic’s 2011-2012 season. “The show is, what we call, a doorslammer,” said Lasley. “Characters are constantly entering and exiting the room through any number of

Continuing its first season in Carmel, the Booth Tarkington Civic Theatre is bringing Hamilton County audiences its performance of the 1930s farce, “Lend Me a Tenor.” Written by Ken Ludwig, and originally premiering on Broadway in 1989, “Lend Me a Tenor” takes place in 1934 and follows a production of the opera “Otello.” The renowned tenor Tito Merelli is scheduled to sing the lead. Unfortunately, chaos ensues before he is even able to leave his hotel room when, through a bought of confusion caused by one of Tito’s fans, his wife leaves him. Distraught over this shocking turn of events, Tito is given several tranquilizers to calm his nerves. Instead, they knock him out cold. Tito must then be impersonated and replaced by the general manager’s assistant, Max. Mistaken identities, plot twists, innuendos and The cast features a blend of new actors and Civic Theatre veterconstant, fast-paced entrances ans (Submitted photo)

The perfecT prelude To ST. paddy’S day! tickets on sale now! TheCenterForThePerformingArts.org or call the Box Office at 317.843.3800.

doors.” This onstage gimmick is a standard of the farce. It adds to the humorous chaos of the show and extenuates the improbable plots and overly-emotive characters. While the show is about the production of an opera, “Lend Me a Tenor” is itself a play, rather than a musical. “It has musical elements to it,” said Lasley, “and it’s difficult in that way. It asks you to find actors who can sing opera, but gives you ways to get around it since that can be difficult, especially in a community theater setting.” Regardless of difficulty, the Civic was able to cast it and, according to Lasley, cast it well. The show boasts an eight-person ensemble that blends both new faces and Civic Theatre veterans. “We have it all in this cast,” Lasley said. “It’s an example of what we do with shows on a regular basis.” Civic regulars Bill Book, Robina Zinc, Parish Williams and Kim Ruse will make a return to the stage alongside four relatively new faces. Cody Carwile, playing the show’s main character, Max, was in the Civic’s performance of “Amadeus” earlier this season, but in a much smaller role. The remaining three cast members, Lisa Ermel, Jamon Randolph and Gracia Gilund, are all first-time performers at the theater. “That’s really our mission: to serve the community, not only by offering low-cost, highquality entertainment, but by offering them a chance to become actors and crewmembers themselves,” said Lasley. Preparations for the show have been taking place during the last several months. Even now, the Civic is preparing to hold auditions for its next production, “Guys and Dolls,” which does not run until April 27. In a comedic setting like “Lend Me a Tenor,” however, all of this preparation can strain the humor, according to Lasley. “The actors are really ready for an audience to get reactions to what’s funny in the show,” Lasley said. “It’s just a lot of fun,” said Lasley. “Any time you get to offer pure entertainment, that’s a great thing for any of us to be a part of.” “Lend Me a Tenor” runs Feb. 10-25 at the Booth Tarkington Civic Theatre at The Center for the Performing Arts. For tickets and more information, visit www.civictheatre.org.

Willpower – will.i.am (Tuesday) – The fourth studio album by will.i.am, known for his work with the Black Eyed Peas, features the lead single, “T.H.E. (The Hardest Ever),” as well as four collaborative singles. “This Means War” (Friday) – Reese Witherspoon, Chris Pine and Tom Hardy star in this comedic action romance, in which two top CIA operatives wage an epic battle against one another after they discover they are dating the same woman.

“Titanic: The Musical” (Friday – Sunday) – This haunting Broadway musical performed at Noblesville’s Belfry Theatre gives an intimate voice to both those perished and those who survived the famous sinking. The astounding ship is viewed from several points of view – by the designer, a stoker, the lookout and the wireless operator.

Hearthside Suppers (Thursday – Sunday) – Have you ever wondered what people ate in the early 19th century and how they prepared it? Enjoy a candlelight feast straight from an 1800s-era cookbook while learning all of this and more at Conner Prairie Interactive History Park. For more information and other local events, see the Event Calendar on page 4.

the chieftains mArCh 6, 7:30 Pm AT The PAllAdium