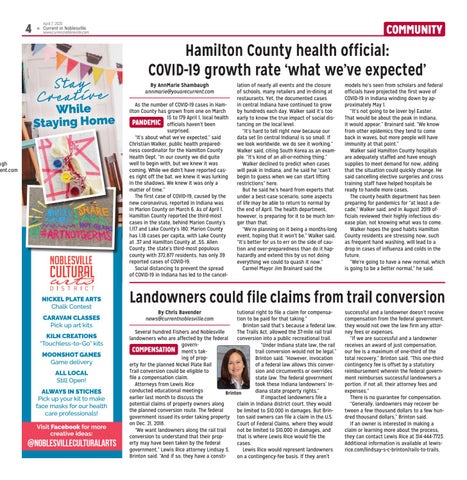 Hamilton County health official: COVID-19 growth rate ‘what we’ve expected’ By AnnMarie Shambaugh annmarie@youarecurrent.com As the number of COVID-19 cases in Hamilton County has grown from one on March 15 to 179 April 1, local health PANDEMIC officials haven’t been surprised. “It’s about what we’ve expected,” said Christian Walker, public health preparedness coordinator for the Hamilton County Health Dept. “In our county we did quite well to begin with, but we knew it was coming. While we didn’t have reported cases right off the bat, we knew it was lurking in the shadows. We knew it was only a matter of time.” The first case of COVID-19, caused by the new coronavirus, reported in Indiana was in Marion County on March 6. As of April 1, Hamilton County reported the third-most cases in the state, behind Marion County’s 1,117 and Lake County’s 180. Marion County has 1.18 cases per capita, with Lake County at .37 and Hamilton County at .55. Allen County, the state’s third-most populous county with 372,877 residents, has only 39 reported cases of COVID-19. Social distancing to prevent the spread of COVID-19 in Indiana has led to the cancel-

lation of nearly all events and the closure of schools, many retailers and in-dining at restaurants. Yet, the documented cases in central Indiana have continued to grow by hundreds each day. Walker said it’s too early to know the true impact of social distancing on the local level. “It’s hard to tell right now because our data set (in central Indiana) is so small. If we look worldwide, we do see it working,” Walker said, citing South Korea as an example. “It’s kind of an all-or-nothing thing.” Walker declined to predict when cases will peak in Indiana, and he said he “can’t begin to guess when we can start lifting restrictions” here. But he said he’s heard from experts that under a best-case scenario, some aspects of life may be able to return to normal by the end of April. The health department, however, is preparing for it to be much longer than that. “We’re planning on it being a months-long event, hoping that it won’t be,” Walker said. “It’s better for us to err on the side of caution and over-preparedness than do it haphazardly and extend this by us not doing everything we could to quash it now.” Carmel Mayor Jim Brainard said the

models he’s seen from scholars and federal officials have projected the first wave of COVID-19 in Indiana winding down by approximately May 1. “It’s not going to be (over by) Easter. That would be about the peak in Indiana, it would appear,” Brainard said. “We know from other epidemics they tend to come back in waves, but more people will have immunity at that point.” Walker said Hamilton County hospitals are adequately staffed and have enough supplies to meet demand for now, adding that the situation could quickly change. He said cancelling elective surgeries and cross training staff have helped hospitals be ready to handle more cases. The county health department has been preparing for pandemics for “at least a decade,” Walker said, and in August 2019 officials reviewed their highly infectious disease plan, not knowing what was to come. Walker hopes the good habits Hamilton County residents are stressing now, such as frequent hand washing, will lead to a drop in cases of influenza and colds in the future. “We’re going to have a new normal, which is going to be a better normal,” he said.

tutional right to file a claim for compensation to be paid for that taking.” Brinton said that’s because a federal law, Several hundred Fishers and Noblesville The Trails Act, allowed the 37-mile rail trail landowners who are affected by the federal conversion into a public recreational trail. govern“Under Indiana state law, the rail COMPENSATION ment’s taktrail conversion would not be legal,” ing of propBrinton said. “However, invocation erty for the planned Nickel Plate Rail of a federal law allows this converTrail conversion could be eligible to sion and circumvents or overrides file a compensation claim. state law. The federal government Attorneys from Lewis Rice took these Indiana landowners’ Inconducted educational meetings diana state property rights.” Brinton earlier last month to discuss the If impacted landowners file a potential claims of property owners along claim in Indiana district court, they would the planned conversion route. The federal be limited to $10,000 in damages. But Bringovernment issued its order taking property ton said owners can file a claim in the U.S. on Dec. 21, 2018. Court of Federal Claims, where they would “We want landowners along the rail trail not be limited to $10,000 in damages, and conversion to understand that their propthat is where Lewis Rice would file the erty may have been taken by the federal cases. government,” Lewis Rice attorney Lindsay S. Lewis Rice would represent landowners Brinton said. “And if so, they have a constion a contingency-fee basis. If they aren’t

successful and a landowner doesn’t receive compensation from the federal government, they would not owe the law firm any attorney fees or expenses. “If we are successful and a landowner receives an award of just compensation, our fee is a maximum of one-third of the total recovery,” Brinton said. “This one-third contingency fee is offset by a statutory reimbursement wherein the federal government reimburses successful landowners a portion, if not all, their attorney fees and expenses.” There is no guarantee for compensation. “Generally, landowners may recover between a few thousand dollars to a few hundred thousand dollars,” Brinton said.  If an owner is interested in making a claim or learning more about the process, they can contact Lewis Rice at 314-444-7723. Additional information is available at lewisrice.com/lindsay-s-c-brinton/rails-to-trails.