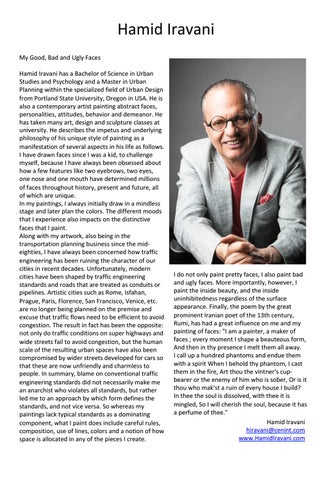 Hamid Iravani My Good, Bad and Ugly Faces Hamid Iravani has a Bachelor of Science in Urban Studies and Psychology and a Master in Urban Planning within the specialized field of Urban Design from Portland State University, Oregon in USA. He is also a contemporary artist painting abstract faces, personalities, attitudes, behavior and demeanor. He has taken many art, design and sculpture classes at university. He describes the impetus and underlying philosophy of his unique style of painting as a manifestation of several aspects in his life as follows. I have drawn faces since I was a kid, to challenge myself, because I have always been obsessed about how a few features like two eyebrows, two eyes, one nose and one mouth have determined millions of faces throughout history, present and future, all of which are unique. In my paintings, I always initially draw in a mindless stage and later plan the colors. The different moods that I experience also impacts on the distinctive faces that I paint. Along with my artwork, also being in the transportation planning business since the mideighties, I have always been concerned how traffic engineering has been ruining the character of our cities in recent decades. Unfortunately, modern cities have been shaped by traffic engineering standards and roads that are treated as conduits or pipelines. Artistic cities such as Rome, Isfahan, Prague, Paris, Florence, San Francisco, Venice, etc. are no longer being planned on the premise and excuse that traffic flows need to be efficient to avoid congestion. The result in fact has been the opposite: not only do traffic conditions on super highways and wide streets fail to avoid congestion, but the human scale of the resulting urban spaces have also been compromised by wider streets developed for cars so that these are now unfriendly and charmless to people. In summary, blame on conventional traffic engineering standards did not necessarily make me an anarchist who violates all standards, but rather led me to an approach by which form defines the standards, and not vice versa. So whereas my paintings lack typical standards as a dominating component, what I paint does include careful rules, composition, use of lines, colors and a notion of how space is allocated in any of the pieces I create.

I do not only paint pretty faces, I also paint bad and ugly faces. More importantly, however, I paint the inside beauty, and the inside uninhibitedness regardless of the surface appearance. Finally, the poem by the great prominent Iranian poet of the 13th century, Rumi, has had a great influence on me and my painting of faces: "I am a painter, a maker of faces ; every moment I shape a beauteous form, And then in thy presence I melt them all away. I call up a hundred phantoms and endue them with a spirit When I behold thy phantom, I cast them in the fire, Art thou the vintner's cupbearer or the enemy of him who is sober, Or is it thou who mak'st a ruin of every house I build? In thee the soul is dissolved, with thee it is mingled, So I will cherish the soul, because it has a perfume of thee.â&#x20AC;? Hamid Iravani hiravani@cenint.com www.HamidIravani.com 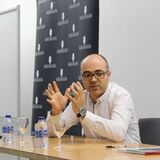 Soft Silence of the Arts is a Iran Contemporary exhibition, showed in Lisbon at Atelier Natalia Gromicho, January 2018. This catalog present...

Soft Silence of the Arts is a Iran Contemporary exhibition, showed in Lisbon at Atelier Natalia Gromicho, January 2018. This catalog present...