Toward a Just Contract, Vol. 1 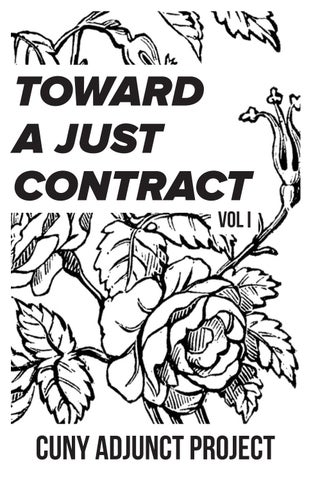 TOWARD A JUST CONTRACT

INTRODUCTION The contract negotiated between CUNY management and the Professional Staff Congress (PSC) expires in November 2017. Following the ratification of an agreement in summer 2016 that increased pay disparity between adjuncts and full-time faculty and set back efforts to end the two-tier system, it’s crucial that our next contract wins serious gains for adjuncts and other part-time workers. To that end, the Adjunct Project launched a campaign in the fall that we’re calling Toward a Just Contract, recognizing the need for a collective agreement that understands justice broadly. We need economic justice – including a living wage and job security – alongside just provisions for factors like gender, race, and ability. Over the 2016–17 academic year, we hosted a conversation between adjuncts and graduate employees who discussed their experiences as women, people of color, and Indigenous workers at CUNY; partnered with the Teaching and Learning Center for a day of events around race and racism in higher education; and held a workshop on collective action with a debt strike organizer. We’ve worked across CUNY campuses and within the union to organize and build adjunct strength and to present our vision of a just contract. This zine is the first installment of the campaign’s written material. On the following pages, you’ll find the results of our survey on working conditions, testimonials from adjuncts and graduate teaching fellows, and the non-negotiable demands – jointly agreed to by the Adjunct Project, the Graduate Center PSC Adjunct Committee, and the CUNY Struggle group – that must form the baseline for our next contract. To find out more about our organizing and get involved, visit us at: cunyadjunctproject.org

NON-NEGOTIABLE Adjunct parity can mean either a complete end to the multi-tier system of faculty labor (such as in the case of Vancouver Community College, where all faculty do the same work, have the same working conditions, and are on the same salary schedule, pro-rated for those working less than full time) or a pro-rata salary schedule for “part-time” faculty so that their wages are in proportion to that of full-time lecturers (as in the case of the California State University). Although many of us would like to see the “Vancouver model” in place at the City University of New York, where adjuncts make roughly 29% to 38% of full-time salaries, have little to no job security, and are largely sidelined from service and research, we recognize that the U.S. labor context and the much-larger scale of CUNY complicate the achievement of that goal. Nevertheless, as we—a group of graduate students at the Graduate Center working as both graduate assistants and adjuncts—have discussed adjunct parity over the last few months, we have come to agreement on the following bottom-line, non-negotiable demands for the upcoming round of bargaining vis-à-vis the expiration of the current PSC-CUNY contract in November 2017: 1. A pro-rata salary schedule for all part-time faculty in proportion to the full-time lecturer salary schedules, with a minimum salary of $7,000 per three-credit course; 2. Genuine job security in the form of a seniority system based on date of original appointment and the number of credits taught over time; 3. Representation of part-time faculty and graduate employees on the bargaining committee in proportion to their numbers in the overall bargaining unit. Although the first two demands would not end the multi-tier system of faculty labor at CUNY, they would produce substantial movement toward parity between the salary and job security of part-time and full-time faculty. The last demand, meanwhile, would produce parity in the bargaining committee, which we hope would help the overall bargaining committee hold fast to the first two demands. Signed by adjuncts and graduate assistants from the PSC GC Adjunct Committee, the Adjunct Project, &amp; CUNY Struggle

ADJUNCT &amp; GTF SURVEY Over 2016 and 2017, the Adjunct Project conducted a survey of adjuncts and graduate teaching fellows (GTFs) across CUNY campuses in order to better understand the working conditions and workloads we all face as part-time workers. Of the 231 responses we received, 77% of these were from adjuncts, 15% from GTFs, and 8% from respondents who do both jobs. We asked a series of 12 questions and provided space for additional comments about working conditions and pay. 4

CLASSES TAUGHT PER SEMESTER 70% of respondents teach at least two classes each semester, with 23% teaching three, and 10% teaching four.

CAMPUSES 71% of the respondents teach at one CUNY campus, while 29% teach at two.

24% of respondents also teach outside of CUNY.

49% work between one to three hours per week grading student papers, with the majority reporting four to ten hours.

62% work two or more hours doing other administrative work on a weekly basis.

85% of the respondents work with students in person or online over and above the one paid office hour per two classes each week at the same campus and department mandated by the PSC contract. 23% are spending three or more additional hours with students. PUBLIC ASSISTANCE 9% of respondents receive public assistance and 12% depend on other kinds of assistance to afford life in NYC.

These 231 responses, while just a sliver of the 10,000 adjuncts and graduate assistants working in the CUNY system, nonetheless provide a snapshot of the workload that part-time workers experience. Between course preparation, grading, and administrative tasks, we’re working as many as 30 hours outside the classroom. Add to this the hours we spend with students beyond our paid office hour - if we have one - and it’s clear that many of us are doing full-time work. The need for public assistance and other forms of support for 21% of the respondents, as well as the 24% teaching at other schools, shows what we all already know: the part-time pay scale for this full time work is not sufficient. Though adjunct wages supposedly start at $72 per hour in 2017, these are only for contact/in-class hours. Given the sheer volume of the additional work we do each week to teach and support our students, our actual per-hour pay is considerably lower. That’s why the Adjunct Project together with the PSC, CUNY Struggle, and the Committee for Adjuncts and Part-timers (CAP), are pushing for a minimum of $7,000 per course. This increase, paired with initiatives like additional paid office hours and course enrollment caps, would be an important first step in addressing the inequalities of a two-tier system of part-time and full-time faculty.

TESTIMONIALS “Every single semester of my PhD program, I have taught at least two courses per semester and many courses in the summer and winter semesters. Over the past couple of years I have taught a 4/4 load with a summer course which amounts to 9 courses an academic year. “If my pay was $7k, I would be making $63k a year. That would place me in the middle class and be a reasonable income with which to support my 3 children. Right now, we are always living paycheck to paycheck and often, CUNY colleges pay us late. Of course, if my pay was $7k, I wouldn’t have to have a 4/4 load while the rest of the graduate center expects me to ‘make satisfactory progress’ and pay tuition for absolutely no reason, after year 5 of my PhD.“ —

“What we are paid is unreasonable and is nothing but adjunct exploitation. Having my pay be $7k would change everything.” — “My time spent teaching at CUNY-Lehman College has been perhaps the most rewarding experience of my career. The long hours spent corresponding with students and drafting new course materials should feel exhausting; and it is. But the exhaustion comes with a deep sense of pride that my actions, however minor, are part of what makes CUNY such a life-changing experience for our students. But I, like many dedicated teachers at CUNY, simply cannot afford to sustain my level of investment when I often only barely make enough in wages to ensure my own survival (on a month-tomonth basis, no less). “Earning $7000 per course, a fair living wage by any measure, would mean that I can continue to devote myself to my students and the University, and can do so without the heavy burden of financial duress. But without a living wage, neither I, nor my fellow adjuncts, can continue on this path for much longer.” —

“In my years adjuncting for CUNY, I’ve learned that the best tool for education is a strong sense of empathy with one’s students. For many people, this requires an enormous amount of energy; energy that is rapidly chipped away each semester as bills pile up and opportunities remain out of reach. So I wonder, how can an adjunct inspire their students when they themselves have diminishing hopes? “With efforts like that of the Adjunct Project, the academic precariat can push back and demand the respect and compensation we deserve.” —

“In addition to teaching, I work 19 hours a week in an office job.” — “For the past 8 years, I have worked a 5/5/3 (summer) workload at CUNY, which in NYC means I am barely able to feed myself. All of this was made worse by the fact that I was forced to run around to 3 different campuses in order to satisfy ‘workload’ requirements. We all know that despite what the PSC claims, the workload drill does not aim to ‘protect’ adjuncts; it helps maintain a pool of cheap labor while masking the embarrassing fact that CUNY part-timers teach/ work more hours than ‘full-time’ faculty members.” — “There is little professional development support from both my program at the Graduate Center and the Program in which I teach at Queens College. We are not treated as professionals. For example, I was given a mentor to work with but was never observed nor evaluated. Our professors also assume and expect us to prioritize our academic work and classes over our teaching load. This has unfavorable consequences on our students and their ability to learn and grow in our classrooms. The way the teaching load requirement is designed is not to benefit the teaching fellow nor her or his students but to help save costs by using cheap labor.” —

TESTIMONIALS, cont’d. “I have taught classes with as many as 130 students on my graduate teaching fellowship. This adds considerable time and effort, but is not compensated since I receive the same fellowship no matter how many students I teach.” — “A disproportionate amount of emotional labor falls to us women adjuncts in the form of care-taking, beyond the extra work of recommendation letter writing, being available to students, etc. that all adjuncts are doing unpaid. The care work involves dealing with student mental health crises and generally being the subject of students’ outlet for personal problems that intersect significantly with their academic progress in every class, of which they only feel comfortable telling you, young woman adjunct for one of their classes. “Tenured and tenure-track faculty are too busy and too white and too male, and brush by. No one feels comfortable talking to them. Where is the compensation for this invisible labor? I also dealt with harassment from a male student last year and it took a toll on my entire life; there is no support for this, and I feared speaking up because of getting a bad evaluation from the student, or just seeming like a nuisance to the department when they could easily hire someone ‘less difficult’ because we are, literally, a dime a dozen.”

Toward a Just Contract, Vol. 1