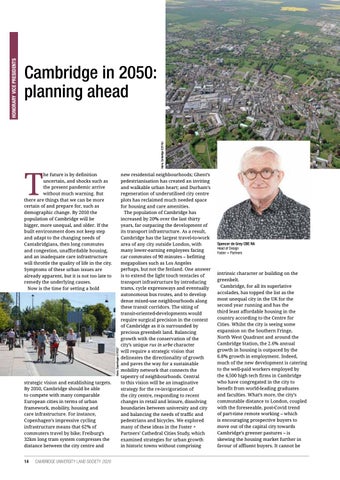 he future is by definition uncertain, and shocks such as the present pandemic arrive without much warning. But there are things that we can be more certain of and prepare for, such as demographic change. By 2050 the population of Cambridge will be bigger, more unequal, and older. If the built environment does not keep step and adapt to the changing needs of Cantabridgians, then long commutes and congestion, unaffordable housing, and an inadequate care infrastructure will throttle the quality of life in the city. Symptoms of these urban issues are already apparent, but it is not too late to remedy the underlying causes. Now is the time for setting a bold

Cambridge in 2050: planning ahead

strategic vision and establishing targets. By 2050, Cambridge should be able to compete with many comparable European cities in terms of urban framework, mobility, housing and care infrastructure. For instance, Copenhagen’s impressive cycling infrastructure means that 62% of commuters travel by bike; Freiburg’s 32km long tram system compresses the distance between the city centre and 14

new residential neighbourhoods; Ghent’s pedestrianisation has created an inviting and walkable urban heart; and Durham’s regeneration of underutilised city centre plots has reclaimed much needed space for housing and care amenities. The population of Cambridge has increased by 20% over the last thirty years, far outpacing the development of its transport infrastructure. As a result, Cambridge has the largest travel-to-work area of any city outside London, with many lower-earning employees facing car commutes of 90 minutes – befitting megapolises such as Los Angeles perhaps, but not the fenland. One answer is to extend the light touch tentacles of transport infrastructure by introducing trams, cycle expressways and eventually autonomous bus routes, and to develop dense mixed-use neighbourhoods along these transit corridors. The siting of transit-oriented-developments would require surgical precision in the context of Cambridge as it is surrounded by precious greenbelt land. Balancing growth with the conservation of the city’s unique rus in urbe character will require a strategic vision that delineates the directionality of growth and paves the way for a sustainable mobility network that connects the tapestry of neighbourhoods. Central to this vision will be an imaginative strategy for the re-invigoration of the city centre, responding to recent changes in retail and leisure, dissolving boundaries between university and city and balancing the needs of traffic and pedestrians and bicycles. We explored many of these ideas in the Foster + Partners’ Cathedral Cities Study, which examined strategies for urban growth in historic towns without comprising

intrinsic character or building on the greenbelt. Cambridge, for all its superlative accolades, has topped the list as the most unequal city in the UK for the second year running and has the third least affordable housing in the country according to the Centre for Cities. Whilst the city is seeing some expansion on the Southern Fringe, North West Quadrant and around the Cambridge Station, the 2.6% annual growth in housing is outpaced by the 6.8% growth in employment. Indeed, much of the new development is catering to the well-paid workers employed by the 4,500 high tech firms in Cambridge who have congregated in the city to benefit from world-leading graduates and faculties. What’s more, the city’s commutable distance to London, coupled with the foreseeable, post-Covid trend of part-time remote working – which is encouraging prospective buyers to move out of the capital city towards Cambridge’s greener pastures – is skewing the housing market further in favour of affluent buyers. It cannot be