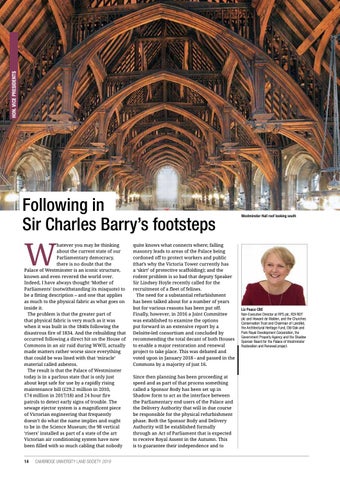 hatever you may be thinking about the current state of our Parliamentary democracy, there is no doubt that the Palace of Westminster is an iconic structure, known and even revered the world over. Indeed, I have always thought ‘Mother of Parliaments’ (notwithstanding its misquote) to be a fitting description – and one that applies as much to the physical fabric as what goes on inside it. The problem is that the greater part of that physical fabric is very much as it was when it was built in the 1840s following the disastrous fire of 1834. And the rebuilding that occurred following a direct hit on the House of Commons in an air raid during WWII, actually made matters rather worse since everything that could be was lined with that ‘miracle’ material called asbestos. The result is that the Palace of Westminster today is in a parlous state that is only just about kept safe for use by a rapidly rising maintenance bill (£29.2 million in 2010, £74 million in 2017/18) and 24 hour fire patrols to detect early signs of trouble. The sewage ejector system is a magnificent piece of Victorian engineering that frequently doesn’t do what the name implies and ought to be in the Science Museum; the 98 vertical ‘risers’ installed as part of a state of the art Victorian air conditioning system have now been filled with so much cabling that nobody

quite knows what connects where; falling masonry leads to areas of the Palace being cordoned off to protect workers and public (that’s why the Victoria Tower currently has a ‘skirt’ of protective scaffolding); and the rodent problem is so bad that deputy Speaker Sir Lindsey Hoyle recently called for the recruitment of a fleet of felines. The need for a substantial refurbishment has been talked about for a number of years but for various reasons has been put off. Finally, however, in 2016 a Joint Committee was established to examine the options put forward in an extensive report by a Deloitte-led consortium and concluded by recommending the total decant of both Houses to enable a major restoration and renewal project to take place. This was debated and voted upon in January 2018 - and passed in the Commons by a majority of just 16. Since then planning has been proceeding at speed and as part of that process something called a Sponsor Body has been set up in Shadow form to act as the interface between the Parliamentary end users of the Palace and the Delivery Authority that will in due course be responsible for the physical refurbishment phase. Both the Sponsor Body and Delivery Authority will be established formally through an Act of Parliament that is expected to receive Royal Assent in the Autumn. This is to guarantee their independence and to

Liz Peace CBE Non-Executive Director at RPS plc, RDI REIT plc and Howard de Walden, and the Churches Conservation Trust and Chairman of LandAid, the Architectural Heritage Fund, Old Oak and Park Royal Development Corporation, the Government Property Agency and the Shadow Sponsor Board for the Palace of Westminster Restoration and Renewal project.