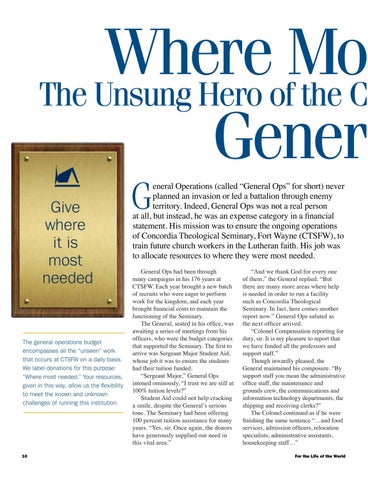 Where Mos The Unsung Hero of the Co Genera G

eneral Operations (called “General Ops” for short) never planned an invasion or led a battalion through enemy territory. Indeed, General Ops was not a real person at all, but instead, he was an expense category in a financial statement. His mission was to ensure the ongoing operations of Concordia Theological Seminary, Fort Wayne (CTSFW), to train future church workers in the Lutheran faith. His job was to allocate resources to where they were most needed.

The general operations budget encompasses all the “unseen” work that occurs at CTSFW on a daily basis. We label donations for this purpose: “Where most needed.” Your resources, given in this way, allow us the flexibility to meet the known and unknown challenges of running this institution.

General Ops had been through many campaigns in his 176 years at CTSFW. Each year brought a new batch of recruits who were eager to perform work for the kingdom, and each year brought financial costs to maintain the functioning of the Seminary. The General, seated in his office, was awaiting a series of meetings from his officers, who were the budget categories that supported the Seminary. The first to arrive was Sergeant Major Student Aid, whose job it was to ensure the students had their tuition funded. “Sergeant Major,” General Ops intoned ominously, “I trust we are still at 100% tuition levels?” Student Aid could not help cracking a smile, despite the General’s serious tone. The Seminary had been offering 100 percent tuition assistance for many years. “Yes, sir. Once again, the donors have generously supplied our need in this vital area.”

“And we thank God for every one of them,” the General replied. “But there are many more areas where help is needed in order to run a facility such as Concordia Theological Seminary. In fact, here comes another report now.” General Ops saluted as the next officer arrived. “Colonel Compensation reporting for duty, sir. It is my pleasure to report that we have funded all the professors and support staff.” Though inwardly pleased, the General maintained his composure. “By support staff you mean the administrative office staff, the maintenance and grounds crew, the communications and information technology departments, the shipping and receiving clerks?” The Colonel continued as if he were finishing the same sentence “…and food services, admission officers, relocation specialists, administrative assistants, housekeeping staff…” For the Life of the World 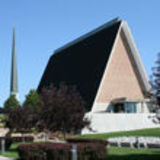 Articles from For the Life of the World - Volume 26, Number 2 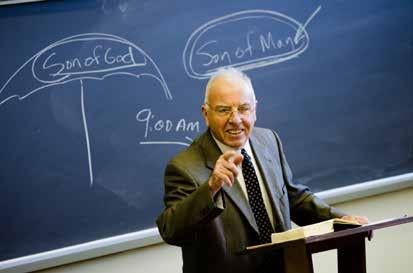 How Are They to Learn without Someone Teaching?

Charles A. Gieschen ########## One could paraphrase this question and apply it to the importance of funding Seminary faculty: “And how are they to learn without someone teaching?” Funding ########## student aid often draws the attention of donors as a worthy ########## cause. It is also important, however, to support financially the faithful and qualified faculty who are central to the formation process of faithful and qualified pastors and deaconesses. One of the ways that CTSFW has worked with donors to assure the support of faculty for the future is through the establishment and funding of endowed chairs. 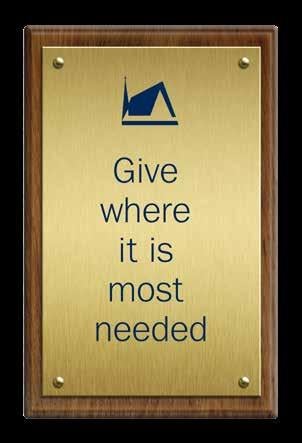 Michael E. Ritzman ########## The general operations budget encompasses all the “unseen” work that occurs at CTSFW on a daily basis. We label donations for this purpose: “Where most needed.” Your resources, given in this way, allow us the flexibility to meet the known and unknown challenges of ########## running this institution.

Trena L. Merryman ########## When a student graduates from the Seminary and ########## receives a first call or placement, it is essential to begin service to the church with the smallest amount of accumulated debt possible. At Concordia Theological Seminary, Fort Wayne (CTSFW), we, by the grace of God and the generosity of His people, can provide full tuition coverage to each of the residential church work ########## students to ensure that this is possible.