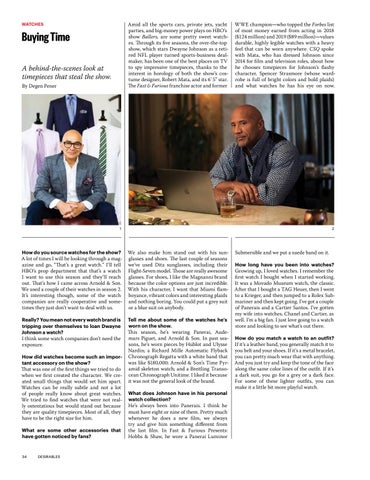 Amid all the sports cars, private jets, yacht parties, and big-money power plays on HBO’s show Ballers, are some pretty sweet watches. Through its five seasons, the over-the-top show, which stars Dwayne Johnson as a retired NFL player turned sports-business dealmaker, has been one of the best places on TV to spy impressive timepieces, thanks to the interest in horology of both the show’s costume designer, Robert Mata, and its 6’ 5” star. The Fast & Furious franchise actor and former

Buying Time A behind-the-scenes look at timepieces that steal the show. By Degen Pener

WWE champion—who topped the Forbes list of most money earned from acting in 2018 ($124 million) and 2019 ($89 million)—values durable, highly legible watches with a heavy feel that can be worn anywhere. CSQ spoke with Mata, who has dressed Johnson since 2014 for fi lm and television roles, about how he chooses timepieces for Johnson’s flashy character, Spencer Strasmore (whose wardrobe is full of bright colors and bold plaids) and what watches he has his eye on now.

How do you source watches for the show?

A lot of times I will be looking through a magazine and go, “That’s a great watch.” I’ll tell HBO’s prop department that that’s a watch I want to use this season and they’ll reach out. That’s how I came across Arnold & Son. We used a couple of their watches in season 2. It’s  interesting though, some of the watch companies are really cooperative and sometimes they just don’t want to deal with us. Really? You mean not every watch brand is tripping over themselves to loan Dwayne Johnson a watch?

I think some watch companies don’t need the exposure. How did watches become such an important accessory on the show?

That was one of the first things we tried to do when we first created the character. We created small things that would set him apart. Watches can be really subtle and not a lot of people really know about great watches. We tried to find watches that were not really ostentatious but would stand out because they are quality timepieces. Most of all, they have to be the right size for him. What are some other accessories that have gotten noticed by fans?

We also make him stand out with his sunglasses and shoes. The last couple of seasons we’ve used Dita sunglasses, including their Flight-Seven model. Those are really awesome glasses. For shoes, I like the Magnanni brand because the color options are just incredible. With his character, I want that Miami flamboyance, vibrant colors and interesting plaids and nothing boring. You could put a grey suit or a blue suit on anybody. Tell me about some of the watches he’s worn on the show.

Th is season, he’s wearing Panerai, Audemars Piguet, and Arnold & Son. In past seasons, he’s worn pieces by Hublot and Ulysse Nardin; a Richard Mille Automatic Flyback Chronograph Regatta with a white band that was like $180,000; Arnold & Son’s Time Pyramid skeleton watch; and a Breitling Transocean Chronograph Unitime. I liked it because it was not the general look of the brand. What does Johnson have in his personal watch collection?

He’s always been into Panerais. I think he must have eight or nine of them. Pretty much whenever he does a new fi lm, we always try and give him something different from the last fi lm. In Fast & Furious Presents: Hobbs & Shaw, he wore a Panerai Luminor

Submersible and we put a suede band on it. How long have you been into watches?

Growing up, I loved watches. I remember the first watch I bought when I started working. It was a Movado Museum watch, the classic. After that I bought a TAG Heuer, then I went to a Krieger, and then jumped to a Rolex Submariner and then kept going. I’ve got a couple of Panerais and a Cartier Santos. I’ve gotten my wife into watches, Chanel and Cartier, as well. I’m a big fan. I just love going to a watch store and looking to see what’s out there. How do you match a watch to an outfit?

If it’s a leather band, you generally match it to you belt and your shoes. If it’s a metal bracelet, you can pretty much wear that with anything. And you just try and keep the tone of the face along the same color lines of the outfit. If it’s a dark suit, you go for a grey or a dark face. For some of these lighter outfits, you can make it a little bit more playful watch.