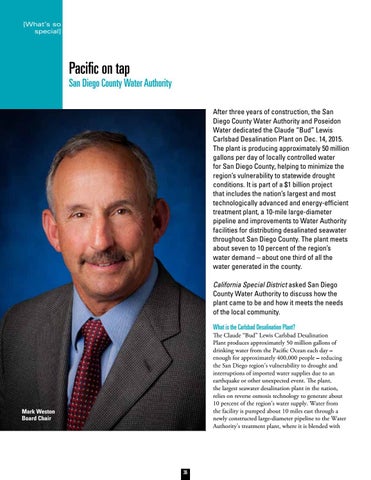 San Diego County Water Authority After three years of construction, the San Diego County Water Authority and Poseidon Water dedicated the Claude “Bud” Lewis Carlsbad Desalination Plant on Dec. 14, 2015. The plant is producing approximately 50 million gallons per day of locally controlled water for San Diego County, helping to minimize the region’s vulnerability to statewide drought conditions. It is part of a $1 billion project that includes the nation’s largest and most technologically advanced and energy-efficient treatment plant, a 10-mile large-diameter pipeline and improvements to Water Authority facilities for distributing desalinated seawater throughout San Diego County. The plant meets about seven to 10 percent of the region’s water demand – about one third of all the water generated in the county. California Special District asked San Diego County Water Authority to discuss how the plant came to be and how it meets the needs of the local community. What is the Carlsbad Desalination Plant? The Claude “Bud” Lewis Carlsbad Desalination Plant produces approximately 50 million gallons of drinking water from the Pacific Ocean each day – enough for approximately 400,000 people – reducing the San Diego region’s vulnerability to drought and interruptions of imported water supplies due to an earthquake or other unexpected event. The plant, the largest seawater desalination plant in the nation, relies on reverse osmosis technology to generate about 10 percent of the region’s water supply. Water from the facility is pumped about 10 miles east through a newly constructed large-diameter pipeline to the Water Authority’s treatment plant, where it is blended with 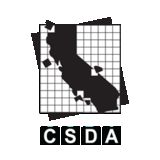