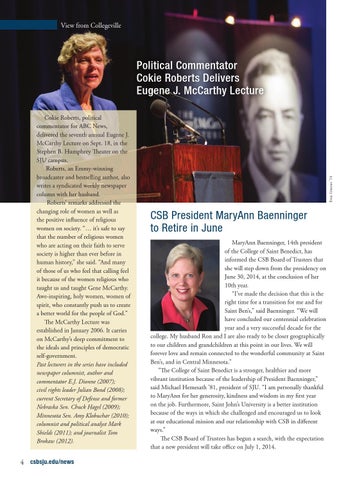 Cokie Roberts, political commentator for ABC News, delivered the seventh annual Eugene J. McCarthy Lecture on Sept. 18, in the Stephen B. Humphrey Theater on the SJU campus. Roberts, an Emmy-winning broadcaster and bestselling author, also writes a syndicated weekly newspaper column with her husband. Roberts’ remarks addressed the changing role of women as well as the positive influence of religious women on society. “… it’s safe to say that the number of religious women who are acting on their faith to serve society is higher than ever before in human history,” she said. “And many of those of us who feel that calling feel it because of the women religious who taught us and taught Gene McCarthy. Awe-inspiring, holy women, women of spirit, who constantly push us to create a better world for the people of God.” The McCarthy Lecture was established in January 2006. It carries on McCarthy’s deep commitment to the ideals and principles of democratic self-government. Past lecturers in the series have included newspaper columnist, author and commentator E.J. Dionne (2007); civil rights leader Julian Bond (2008); current Secretary of Defense and former Nebraska Sen. Chuck Hagel (2009); Minnesota Sen. Amy Klobuchar (2010); columnist and political analyst Mark Shields (2011); and journalist Tom Brokaw (2012).

CSB President MaryAnn Baenninger to Retire in June MaryAnn Baenninger, 14th president of the College of Saint Benedict, has informed the CSB Board of Trustees that she will step down from the presidency on June 30, 2014, at the conclusion of her 10th year. “I’ve made the decision that this is the right time for a transition for me and for Saint Ben’s,” said Baenninger. “We will have concluded our centennial celebration year and a very successful decade for the college. My husband Ron and I are also ready to be closer geographically to our children and grandchildren at this point in our lives. We will forever love and remain connected to the wonderful community at Saint Ben’s, and in Central Minnesota.” “The College of Saint Benedict is a stronger, healthier and more vibrant institution because of the leadership of President Baenninger,” said Michael Hemesath ’81, president of SJU. “I am personally thankful to MaryAnn for her generosity, kindness and wisdom in my first year on the job. Furthermore, Saint John’s University is a better institution because of the ways in which she challenged and encouraged us to look at our educational mission and our relationship with CSB in different ways.” The CSB Board of Trustees has begun a search, with the expectation that a new president will take office on July 1, 2014.