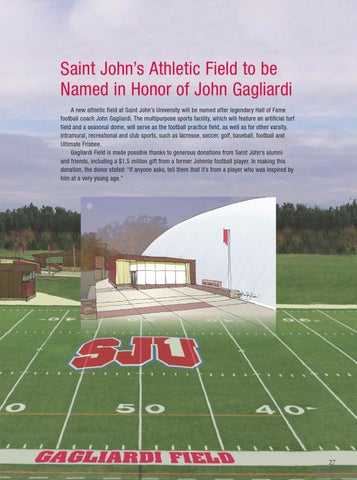 Saint John’s Athletic Field to be Named in Honor of John Gagliardi A new athletic field at Saint John’s University will be named after legendary Hall of Fame football coach John Gagliardi. The multipurpose sports facility, which will feature an artificial turf field and a seasonal dome, will serve as the football practice field, as well as for other varsity, intramural, recreational and club sports, such as lacrosse, soccer, golf, baseball, football and Ultimate Frisbee. Gagliardi Field is made possible thanks to generous donations from Saint John’s alumni and friends, including a $1.5 million gift from a former Johnnie football player. In making this donation, the donor stated: “If anyone asks, tell them that it’s from a player who was inspired by him at a very young age.”