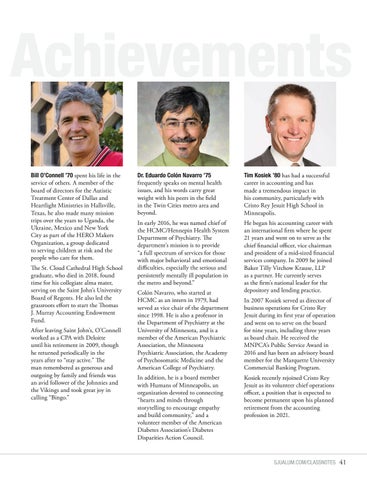 Achievements Bill O’Connell ’70 spent his life in the service of others. A member of the board of directors for the Autistic Treatment Center of Dallas and Heartlight Ministries in Hallsville, Texas, he also made many mission trips over the years to Uganda, the Ukraine, Mexico and New York City as part of the HERO Makers Organization, a group dedicated to serving children at risk and the people who care for them. The St. Cloud Cathedral High School graduate, who died in 2018, found time for his collegiate alma mater, serving on the Saint John’s University Board of Regents. He also led the grassroots effort to start the Thomas J. Murray Accounting Endowment Fund. After leaving Saint John’s, O’Connell worked as a CPA with Deloitte until his retirement in 2009, though he returned periodically in the years after to “stay active.” The man remembered as generous and outgoing by family and friends was an avid follower of the Johnnies and the Vikings and took great joy in calling “Bingo.”

Dr. Eduardo Colón Navarro ’75 frequently speaks on mental health issues, and his words carry great weight with his peers in the field in the Twin Cities metro area and beyond.

Tim Kosiek ’80 has had a successful career in accounting and has made a tremendous impact in his community, particularly with Cristo Rey Jesuit High School in Minneapolis.

In early 2016, he was named chief of the HCMC/Hennepin Health System Department of Psychiatry. The department’s mission is to provide “a full spectrum of services for those with major behavioral and emotional difficulties, especially the serious and persistently mentally ill population in the metro and beyond.”

He began his accounting career with an international firm where he spent 21 years and went on to serve as the chief financial officer, vice chairman and president of a mid-sized financial services company. In 2009 he joined Baker Tilly Virchow Krause, LLP as a partner. He currently serves as the firm’s national leader for the depository and lending practice.

Colón Navarro, who started at HCMC as an intern in 1979, had served as vice chair of the department since 1998. He is also a professor in the Department of Psychiatry at the University of Minnesota, and is a member of the American Psychiatric Association, the Minnesota Psychiatric Association, the Academy of Psychosomatic Medicine and the American College of Psychiatry. In addition, he is a board member with Humans of Minneapolis, an organization devoted to connecting “hearts and minds through storytelling to encourage empathy and build community,” and a volunteer member of the American Diabetes Association’s Diabetes Disparities Action Council.

In 2007 Kosiek served as director of business operations for Cristo Rey Jesuit during its first year of operation and went on to serve on the board for nine years, including three years as board chair. He received the MNPCA’s Public Service Award in 2016 and has been an advisory board member for the Marquette University Commercial Banking Program. Kosiek recently rejoined Cristo Rey Jesuit as its volunteer chief operations officer, a position that is expected to become permanent upon his planned retirement from the accounting profession in 2021.