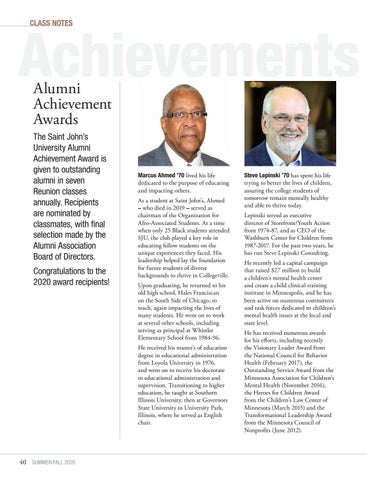 The Saint John’s University Alumni Achievement Award is given to outstanding alumni in seven Reunion classes annually. Recipients are nominated by classmates, with final selection made by the Alumni Association Board of Directors. Congratulations to the 2020 award recipients!

Marcus Ahmed ’70 lived his life dedicated to the purpose of educating and impacting others. As a student at Saint John’s, Ahmed – who died in 2019 – served as chairman of the Organization for Afro-Associated Students. At a time when only 25 Black students attended SJU, the club played a key role in educating fellow students on the unique experiences they faced. His leadership helped lay the foundation for future students of diverse backgrounds to thrive in Collegeville. Upon graduating, he returned to his old high school, Hales Franciscan on the South Side of Chicago, to teach, again impacting the lives of many students. He went on to work at several other schools, including serving as principal at Whistler Elementary School from 1984-96. He received his master’s of education degree in educational administration from Loyola University in 1976, and went on to receive his doctorate in educational administration and supervision. Transitioning to higher education, he taught at Southern Illinois University, then at Governors State University in University Park, Illinois, where he served as English chair.

Steve Lepinski ’70 has spent his life trying to better the lives of children, assuring the college students of tomorrow remain mentally healthy and able to thrive today. Lepinski served as executive director of Storefront/Youth Action from 1974-87, and as CEO of the Washburn Center for Children from 1987-2017. For the past two years, he has run Steve Lepinski Consulting. He recently led a capital campaign that raised $27 million to build a children’s mental health center and create a child clinical training institute in Minneapolis, and he has been active on numerous committees and task forces dedicated to children’s mental health issues at the local and state level. He has received numerous awards for his efforts, including recently the Visionary Leader Award from the National Council for Behavior Health (February 2017), the Outstanding Service Award from the Minnesota Association for Children’s Mental Health (November 2016), the Heroes for Children Award from the Children’s Law Center of Minnesota (March 2015) and the Transformational Leadership Award from the Minnesota Council of Nonprofits (June 2012).