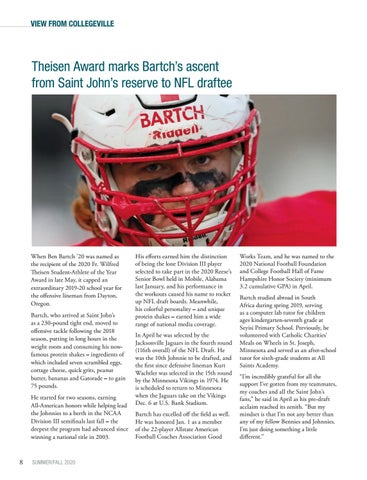 When Ben Bartch ’20 was named as the recipient of the 2020 Fr. Wilfred Theisen Student-Athlete of the Year Award in late May, it capped an extraordinary 2019-20 school year for the offensive lineman from Dayton, Oregon. Bartch, who arrived at Saint John’s as a 230-pound tight end, moved to offensive tackle following the 2018 season, putting in long hours in the weight room and consuming his nowfamous protein shakes – ingredients of which included seven scrambled eggs, cottage cheese, quick grits, peanut butter, bananas and Gatorade – to gain 75 pounds. He started for two seasons, earning All-American honors while helping lead the Johnnies to a berth in the NCAA Division III semifinals last fall – the deepest the program had advanced since winning a national title in 2003.

His efforts earned him the distinction of being the lone Division III player selected to take part in the 2020 Reese’s Senior Bowl held in Mobile, Alabama last January, and his performance in the workouts caused his name to rocket up NFL draft boards. Meanwhile, his colorful personality – and unique protein shakes – earned him a wide range of national media coverage. In April he was selected by the Jacksonville Jaguars in the fourth round (116th overall) of the NFL Draft. He was the 10th Johnnie to be drafted, and the first since defensive lineman Kurt Wachtler was selected in the 15th round by the Minnesota Vikings in 1974. He is scheduled to return to Minnesota when the Jaguars take on the Vikings Dec. 6 at U.S. Bank Stadium. Bartch has excelled off the field as well. He was honored Jan. 1 as a member of the 22-player Allstate American Football Coaches Association Good

Works Team, and he was named to the 2020 National Football Foundation and College Football Hall of Fame Hampshire Honor Society (minimum 3.2 cumulative GPA) in April. Bartch studied abroad in South Africa during spring 2019, serving as a computer lab tutor for children ages kindergarten-seventh grade at Seyisi Primary School. Previously, he volunteered with Catholic Charities&#39; Meals on Wheels in St. Joseph, Minnesota and served as an after-school tutor for sixth-grade students at All Saints Academy. “I’m incredibly grateful for all the support I’ve gotten from my teammates, my coaches and all the Saint John’s fans,” he said in April as his pre-draft acclaim reached its zenith. “But my mindset is that I’m not any better than any of my fellow Bennies and Johnnies. I’m just doing something a little different.”