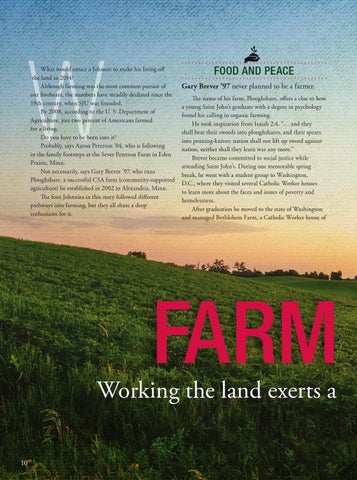 What would entice a Johnnie to make his living off the land in 2014? Although farming was the most common pursuit of our forebears, the numbers have steadily declined since the 19th century, when SJU was founded. By 2008, according to the U. S .Department of Agriculture, just two percent of Americans farmed for a living. Do you have to be born into it? Probably, says Aaron Peterson ’04, who is following in the family footsteps at the Sever Peterson Farm in Eden Prairie, Minn. Not necessarily, says Gary Brever ’97, who runs Ploughshare, a successful CSA farm (community-supported agriculture) he established in 2002 in Alexandria, Minn. The four Johnnies in this story followed different pathways into farming, but they all share a deep enthusiasm for it.

FOOD AND PEACE Gary Brever ’97 never planned to be a farmer. The name of his farm, Ploughshare, offers a clue to how a young Saint John’s graduate with a degree in psychology found his calling in organic farming. He took inspiration from Isaiah 2:4. “… and they shall beat their swords into ploughshares, and their spears into pruning-knives: nation shall not lift up sword against nation, neither shall they learn war any more.” Brever became committed to social justice while attending Saint John’s. During one memorable spring break, he went with a student group to Washington, D.C., where they visited several Catholic Worker houses to learn more about the faces and issues of poverty and homelessness. After graduation he moved to the state of Washington and managed Bethlehem Farm, a Catholic Worker house of

Working the land exerts a 10