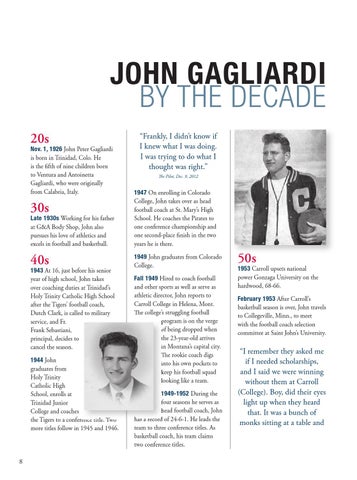 JOHN GAGLIARDI BY THE DECADE 20s

Nov. 1, 1926 John Peter Gagliardi is born in Trinidad, Colo. He is the fifth of nine children born to Ventura and Antoinetta Gagliardi, who were originally from Calabria, Italy.

Late 1930s Working for his father at G&amp;A Body Shop, John also pursues his love of athletics and excels in football and basketball.

1947 On enrolling in Colorado College, John takes over as head football coach at St. Mary’s High School. He coaches the Pirates to one conference championship and one second-place finish in the two years he is there.

1943 At 16, just before his senior year of high school, John takes over coaching duties at Trinidad’s Holy Trinity Catholic High School after the Tigers’ football coach, Dutch Clark, is called to military service, and Fr. Frank Sebastiani, principal, decides to cancel the season. 1944 John graduates from Holy Trinity Catholic High School, enrolls at Trinidad Junior College and coaches the Tigers to a conference title. Two more titles follow in 1945 and 1946.

“Frankly, I didn’t know if I knew what I was doing. I was trying to do what I thought was right.”

Fall 1949 Hired to coach football and other sports as well as serve as athletic director, John reports to Carroll College in Helena, Mont. The college’s struggling football program is on the verge of being dropped when the 23-year-old arrives in Montana’s capital city. The rookie coach digs into his own pockets to keep his football squad looking like a team. 1949-1952 During the four seasons he serves as head football coach, John has a record of 24-6-1. He leads the team to three conference titles. As basketball coach, his team claims two conference titles.

1953 Carroll upsets national power Gonzaga University on the hardwood, 68-66. February 1953 After Carroll’s basketball season is over, John travels to Collegeville, Minn., to meet with the football coach selection committee at Saint John’s University.

“I remember they asked me if I needed scholarships, and I said we were winning without them at Carroll (College). Boy, did their eyes light up when they heard that. It was a bunch of monks sitting at a table and