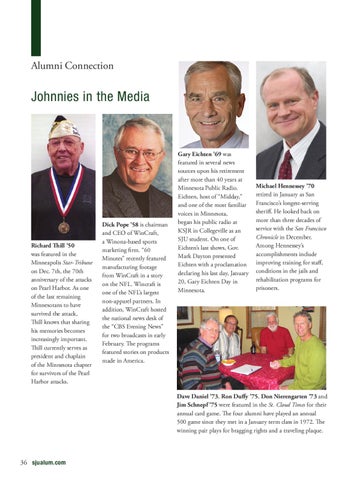 Richard Thill ’50 was featured in the Minneapolis Star-Tribune on Dec. 7th, the 70th anniversary of the attacks on Pearl Harbor. As one of the last remaining Minnesotans to have survived the attack, Thill knows that sharing his memories becomes increasingly important. Thill currently serves as president and chaplain of the Minnesota chapter for survivors of the Pearl Harbor attacks.

Dick Pope ’58 is chairman and CEO of WinCraft, a Winona-based sports marketing firm. “60 Minutes” recently featured manufacturing footage from WinCraft in a story on the NFL. Wincraft is one of the NFL’s largest non-apparel partners. In addition, WinCraft hosted the national news desk of the “CBS Evening News” for two broadcasts in early February. The programs featured stories on products made in America.

Gary Eichten ’69 was featured in several news sources upon his retirement after more than 40 years at Minnesota Public Radio. Eichten, host of “Midday,” and one of the most familiar voices in Minnesota, began his public radio at KSJR in Collegeville as an SJU student. On one of Eichten’s last shows, Gov. Mark Dayton presented Eichten with a proclamation declaring his last day, January 20, Gary Eichten Day in Minnesota.

Michael Hennessey ’70 retired in January as San Francisco’s longest-serving sheriff. He looked back on more than three decades of service with the San Francisco Chronicle in December. Among Hennessey’s accomplishments include improving training for staff, conditions in the jails and rehabilitation programs for prisoners.

Dave Daniel ’73, Ron Duffy ’75, Don Nierengarten ’73 and Jim Schnepf ’75 were featured in the St. Cloud Times for their annual card game. The four alumni have played an annual 500 game since they met in a January term class in 1972. The winning pair plays for bragging rights and a traveling plaque.