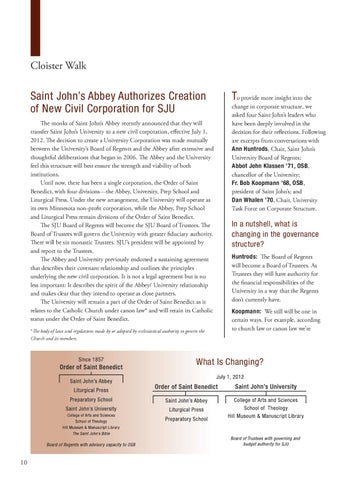 Saint John’s Abbey Authorizes Creation of New Civil Corporation for SJU The monks of Saint John’s Abbey recently announced that they will transfer Saint John’s University to a new civil corporation, effective July 1, 2012. The decision to create a University Corporation was made mutually between the University’s Board of Regents and the Abbey after extensive and thoughtful deliberations that began in 2006. The Abbey and the University feel this structure will best ensure the strength and viability of both institutions. Until now, there has been a single corporation, the Order of Saint Benedict, with four divisions—the Abbey, University, Prep School and Liturgical Press. Under the new arrangement, the University will operate as its own Minnesota non-profit corporation, while the Abbey, Prep School and Liturgical Press remain divisions of the Order of Saint Benedict. The SJU Board of Regents will become the SJU Board of Trustees. The Board of Trustees will govern the University with greater fiduciary authority. There will be six monastic Trustees. SJU’s president will be appointed by and report to the Trustees. The Abbey and University previously endorsed a sustaining agreement that describes their covenant relationship and outlines the principles underlying the new civil corporation. It is not a legal agreement but is no less important: It describes the spirit of the Abbey/ University relationship and makes clear that they intend to operate as close partners. The University will remain a part of the Order of Saint Benedict as it relates to the Catholic Church under canon law* and will retain its Catholic status under the Order of Saint Benedict. *The body of laws and regulations made by or adopted by ecclesiastical authority to govern the Church and its members.

To provide more insight into the change in corporate structure, we asked four Saint John’s leaders who have been deeply involved in the decision for their reflections. Following are excerpts from conversations with Ann Huntrods, Chair, Saint John’s University Board of Regents; Abbot John Klassen ’71, OSB, chancellor of the University; Fr. Bob Koopmann ’68, OSB, president of Saint John’s; and Dan Whalen ’70, Chair, University Task Force on Corporate Structure.

In a nutshell, what is changing in the governance structure? Huntrods: The Board of Regents will become a Board of Trustees. As Trustees they will have authority for the financial responsibilities of the University in a way that the Regents don’t currently have. Koopmann: We still will be one in certain ways. For example, according to church law or canon law we’re