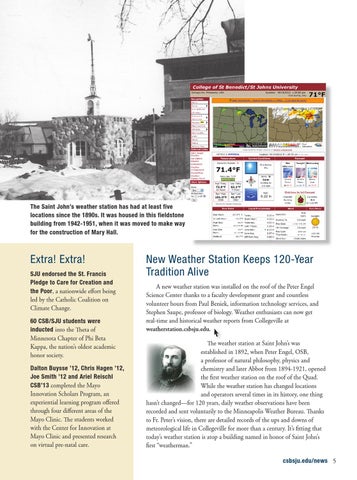 The Saint John’s weather station has had at least five locations since the 1890s. It was housed in this fieldstone building from 1942-1951, when it was moved to make way for the construction of Mary Hall.

Extra! Extra! SJU endorsed the St. Francis Pledge to Care for Creation and the Poor, a nationwide effort being led by the Catholic Coalition on Climate Change. 60 CSB/SJU students were inducted into the Theta of Minnesota Chapter of Phi Beta Kappa, the nation’s oldest academic honor society. Dalton Buysse ’12, Chris Hagen ’12, Joe Smith ’12 and Ariel Reischl CSB’13 completed the Mayo Innovation Scholars Program, an experiential learning program offered through four different areas of the Mayo Clinic. The students worked with the Center for Innovation at Mayo Clinic and presented research on virtual pre-natal care.

New Weather Station Keeps 120-Year Tradition Alive A new weather station was installed on the roof of the Peter Engel Science Center thanks to a faculty development grant and countless volunteer hours from Paul Beniek, information technology services, and Stephen Saupe, professor of biology. Weather enthusiasts can now get real-time and historical weather reports from Collegeville at weatherstation.csbsju.edu. The weather station at Saint John’s was established in 1892, when Peter Engel, OSB, a professor of natural philosophy, physics and chemistry and later Abbot from 1894-1921, opened the first weather station on the roof of the Quad. While the weather station has changed locations and operators several times in its history, one thing hasn’t changed—for 120 years, daily weather observations have been recorded and sent voluntarily to the Minneapolis Weather Bureau. Thanks to Fr. Peter’s vision, there are detailed records of the ups and downs of meteorological life in Collegeville for more than a century. It’s fitting that today’s weather station is atop a building named in honor of Saint John’s first “weatherman.” csbsju.edu/news 5