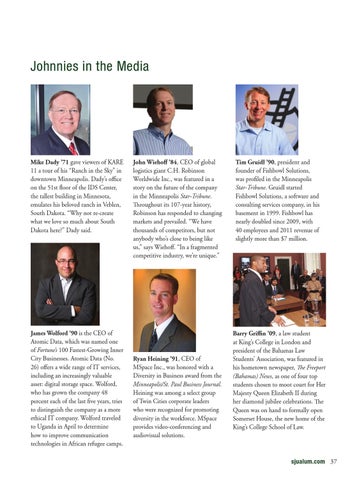 Mike Dady ’71 gave viewers of KARE 11 a tour of his “Ranch in the Sky” in downtown Minneapolis. Dady’s office on the 51st floor of the IDS Center, the tallest building in Minnesota, emulates his beloved ranch in Veblen, South Dakota. “Why not re-create what we love so much about South Dakota here?” Dady said.

James Wolford ’90 is the CEO of Atomic Data, which was named one of Fortune’s 100 Fastest-Growing Inner City Businesses. Atomic Data (No. 26) offers a wide range of IT services, including an increasingly valuable asset: digital storage space. Wolford, who has grown the company 48 percent each of the last five years, tries to distinguish the company as a more ethical IT company. Wolford traveled to Uganda in April to determine how to improve communication technologies in African refugee camps.

John Wiehoff ’84, CEO of global logistics giant C.H. Robinson Worldwide Inc., was featured in a story on the future of the company in the Minneapolis Star-Tribune. Throughout its 107-year history, Robinson has responded to changing markets and prevailed. “We have thousands of competitors, but not anybody who’s close to being like us,” says Wiehoff. “In a fragmented competitive industry, we’re unique.”

Ryan Heining ’91, CEO of MSpace Inc., was honored with a Diversity in Business award from the Minneapolis/St. Paul Business Journal. Heining was among a select group of Twin Cities corporate leaders who were recognized for promoting diversity in the workforce. MSpace provides video-conferencing and audiovisual solutions.

Tim Gruidl ’90, president and founder of Fishbowl Solutions, was profiled in the Minneapolis Star-Tribune. Gruidl started Fishbowl Solutions, a software and consulting services company, in his basement in 1999. Fishbowl has nearly doubled since 2009, with 40 employees and 2011 revenue of slightly more than $7 million.

Barry Griffin ’09, a law student at King’s College in London and president of the Bahamas Law Students’ Association, was featured in his hometown newspaper, The Freeport (Bahamas) News, as one of four top students chosen to moot court for Her Majesty Queen Elizabeth II during her diamond jubilee celebrations. The Queen was on hand to formally open Somerset House, the new home of the King’s College School of Law.