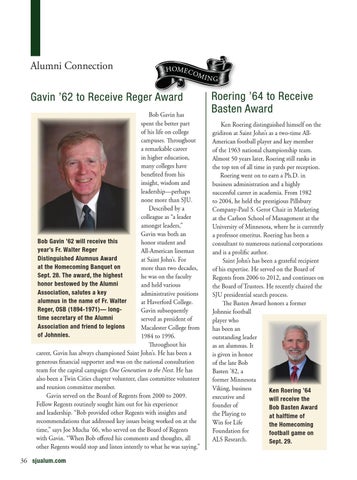 Gavin ’62 to Receive Reger Award Bob Gavin has spent the better part of his life on college campuses. Throughout a remarkable career in higher education, many colleges have benefited from his insight, wisdom and leadership—perhaps none more than SJU. Described by a colleague as “a leader amongst leaders,” Gavin was both an Bob Gavin ’62 will receive this honor student and year’s Fr. Walter Reger All-American lineman Distinguished Alumnus Award at Saint John’s. For at the Homecoming Banquet on more than two decades, Sept. 28. The award, the highest he was on the faculty honor bestowed by the Alumni and held various Association, salutes a key administrative positions alumnus in the name of Fr. Walter at Haverford College. Reger, OSB (1894-1971)— longGavin subsequently time secretary of the Alumni served as president of Association and friend to legions Macalester College from of Johnnies. 1984 to 1996. Throughout his career, Gavin has always championed Saint John’s. He has been a generous financial supporter and was on the national consultation team for the capital campaign One Generation to the Next. He has also been a Twin Cities chapter volunteer, class committee volunteer and reunion committee member. Gavin served on the Board of Regents from 2000 to 2009. Fellow Regents routinely sought him out for his experience and leadership. “Bob provided other Regents with insights and recommendations that addressed key issues being worked on at the time,” says Joe Mucha ’66, who served on the Board of Regents with Gavin. “When Bob offered his comments and thoughts, all other Regents would stop and listen intently to what he was saying.”

Roering ’64 to Receive Basten Award Ken Roering distinguished himself on the gridiron at Saint John’s as a two-time AllAmerican football player and key member of the 1963 national championship team. Almost 50 years later, Roering still ranks in the top ten of all time in yards per reception. Roering went on to earn a Ph.D. in business administration and a highly successful career in academia. From 1982 to 2004, he held the prestigious Pillsbury Company-Paul S. Gerot Chair in Marketing at the Carlson School of Management at the University of Minnesota, where he is currently a professor emeritus. Roering has been a consultant to numerous national corporations and is a prolific author. Saint John’s has been a grateful recipient of his expertise. He served on the Board of Regents from 2006 to 2012, and continues on the Board of Trustees. He recently chaired the SJU presidential search process. The Basten Award honors a former Johnnie football player who has been an outstanding leader as an alumnus. It is given in honor of the late Bob Basten ’82, a former Minnesota Viking, business Ken Roering ’64 executive and will receive the founder of Bob Basten Award the Playing to at halftime of Win for Life the Homecoming Foundation for football game on ALS Research. Sept. 29.