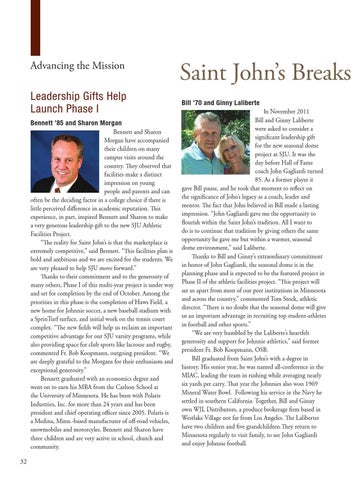 Leadership Gifts Help Launch Phase I Bennett ’85 and Sharon Morgan Bennett and Sharon Morgan have accompanied their children on many campus visits around the country. They observed that facilities make a distinct impression on young people and parents and can often be the deciding factor in a college choice if there is little perceived difference in academic reputation. This experience, in part, inspired Bennett and Sharon to make a very generous leadership gift to the new SJU Athletic Facilities Project. “The reality for Saint John’s is that the marketplace is extremely competitive,” said Bennett. “This facilities plan is bold and ambitious and we are excited for the students. We are very pleased to help SJU move forward.” Thanks to their commitment and to the generosity of many others, Phase I of this multi-year project is under way and set for completion by the end of October. Among the priorities in this phase is the completion of Haws Field, a new home for Johnnie soccer, a new baseball stadium with a SprinTurf surface, and initial work on the tennis court complex. “The new fields will help us reclaim an important competitive advantage for our SJU varsity programs, while also providing space for club sports like lacrosse and rugby, commented Fr. Bob Koopmann, outgoing president. “We are deeply grateful to the Morgans for their enthusiasm and exceptional generosity.” Bennett graduated with an economics degree and went on to earn his MBA from the Carlson School at the University of Minnesota. He has been with Polaris Industries, Inc. for more than 24 years and has been president and chief operating officer since 2005. Polaris is a Medina, Minn.-based manufacturer of off-road vehicles, snowmobiles and motorcyles. Bennett and Sharon have three children and are very active in school, church and community.

Saint John’s Breaks Bill ’70 and Ginny Laliberte In November 2011 Bill and Ginny Laliberte were asked to consider a significant leadership gift for the new seasonal dome project at SJU. It was the day before Hall of Fame coach John Gagliardi turned 85. As a former player it gave Bill pause, and he took that moment to reflect on the significance of John’s legacy as a coach, leader and mentor. The fact that John believed in Bill made a lasting impression. “John Gagliardi gave me the opportunity to flourish within the Saint John’s tradition. All I want to do is to continue that tradition by giving others the same opportunity he gave me but within a warmer, seasonal dome environment,” said Laliberte. Thanks to Bill and Ginny’s extraordinary commitment in honor of John Gagliardi, the seasonal dome is in the planning phase and is expected to be the featured project in Phase II of the athletic facilities project. “This project will set us apart from most of our peer institutions in Minnesota and across the country,” commented Tom Stock, athletic director. “There is no doubt that the seasonal dome will give us an important advantage in recruiting top student-athletes in football and other sports.” “We are very humbled by the Laliberte’s heartfelt generosity and support for Johnnie athletics,” said former president Fr. Bob Koopmann, OSB. Bill graduated from Saint John’s with a degree in history. His senior year, he was named all-conference in the MIAC, leading the team in rushing while averaging nearly six yards per carry. That year the Johnnies also won 1969 Mineral Water Bowl. Following his service in the Navy he settled in southern California. Together, Bill and Ginny own WJL Distributors, a produce brokerage firm based in Westlake Village not far from Los Angeles. The Lalibertes have two children and five grandchildren.They return to Minnesota regularly to visit family, to see John Gagliardi and enjoy Johnnie football.