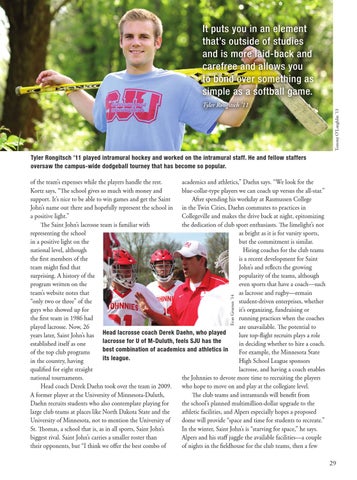 It puts you in an element that’s outside of studies and is more laid-back and carefree and allows you to bond over something as simple as a softball game.

Tyler Rongitsch ’11 played intramural hockey and worked on the intramural staff. He and fellow staffers oversaw the campus-wide dodgeball tourney that has become so popular.

of the team’s expenses while the players handle the rest. academics and athletics,” Daehn says. “We look for the Kortz says, “The school gives so much with money and blue-collar-type players we can coach up versus the all-star.” support. It’s nice to be able to win games and get the Saint After spending his workday at Rasmussen College John’s name out there and hopefully represent the school in in the Twin Cities, Daehn commutes to practices in a positive light.” Collegeville and makes the drive back at night, epitomizing The Saint John’s lacrosse team is familiar with the dedication of club sport enthusiasts. The limelight’s not representing the school as bright as it is for varsity sports, in a positive light on the but the commitment is similar. national level, although Hiring coaches for the club teams the first members of the is a recent development for Saint team might find that John’s and reflects the growing surprising. A history of the popularity of the teams, although program written on the even sports that have a coach—such team’s website notes that as lacrosse and rugby—remain “only two or three” of the student-driven enterprises, whether guys who showed up for it’s organizing, fundraising or the first team in 1986 had running practices when the coaches played lacrosse. Now, 26 are unavailable. The potential to Head lacrosse coach Derek Daehn, who played years later, Saint John’s has lure top-flight recruits plays a role lacrosse for U of M-Duluth, feels SJU has the established itself as one in deciding whether to hire a coach. best combination of academics and athletics in of the top club programs For example, the Minnesota State its league. in the country, having High School League sponsors qualified for eight straight lacrosse, and having a coach enables national tournaments. the Johnnies to devote more time to recruiting the players Head coach Derek Daehn took over the team in 2009. who hope to move on and play at the collegiate level. A former player at the University of Minnesota-Duluth, The club teams and intramurals will benefit from Daehn recruits students who also contemplate playing for the school’s planned multimillion-dollar upgrade to the large club teams at places like North Dakota State and the athletic facilities, and Alpers especially hopes a proposed University of Minnesota, not to mention the University of dome will provide “space and time for students to recreate.” St. Thomas, a school that is, as in all sports, Saint John’s In the winter, Saint John’s is “starving for space,” he says. biggest rival. Saint John’s carries a smaller roster than Alpers and his staff juggle the available facilities—a couple their opponents, but “I think we offer the best combo of of nights in the fieldhouse for the club teams, then a few