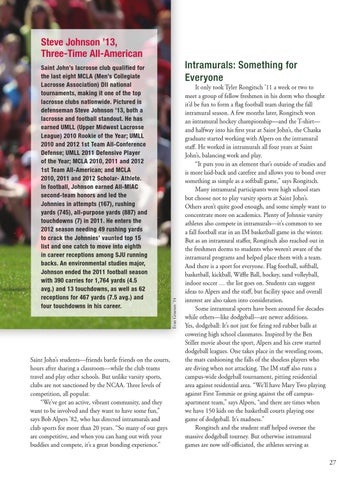 Saint John’s students—friends battle friends on the courts, hours after sharing a classroom—while the club teams travel and play other schools. But unlike varsity sports, clubs are not sanctioned by the NCAA. Three levels of competition, all popular. “We’ve got an active, vibrant community, and they want to be involved and they want to have some fun,” says Bob Alpers ’82, who has directed intramurals and club sports for more than 20 years. “So many of our guys are competitive, and when you can hang out with your buddies and compete, it’s a great bonding experience.”

Intramurals: Something for Everyone

Saint John’s lacrosse club qualified for the last eight MCLA (Men’s Collegiate Lacrosse Association) DII national tournaments, making it one of the top lacrosse clubs nationwide. Pictured is defenseman Steve Johnson ’13, both a lacrosse and football standout. He has earned UMLL (Upper Midwest Lacrosse League) 2010 Rookie of the Year; UMLL 2010 and 2012 1st Team All-Conference Defense; UMLL 2011 Defensive Player of the Year; MCLA 2010, 2011 and 2012 1st Team All-American; and MCLA 2010, 2011 and 2012 Scholar- Athlete. In football, Johnson earned All-MIAC second-team honors and led the Johnnies in attempts (167), rushing yards (745), all-purpose yards (887) and touchdowns (7) in 2011. He enters the 2012 season needing 49 rushing yards to crack the Johnnies’ vaunted top 15 list and one catch to move into eighth in career receptions among SJU running backs. An environmental studies major, Johnson ended the 2011 football season with 390 carries for 1,764 yards (4.5 avg.) and 13 touchdowns, as well as 62 receptions for 467 yards (7.5 avg.) and four touchdowns in his career.

It only took Tyler Rongitsch ’11 a week or two to meet a group of fellow freshmen in his dorm who thought it’d be fun to form a flag football team during the fall intramural season. A few months later, Rongitsch won an intramural hockey championship—and the T-shirt— and halfway into his first year at Saint John’s, the Chaska graduate started working with Alpers on the intramural staff. He worked in intramurals all four years at Saint John’s, balancing work and play. “It puts you in an element that’s outside of studies and is more laid-back and carefree and allows you to bond over something as simple as a softball game,” says Rongitsch. Many intramural participants were high school stars but choose not to play varsity sports at Saint John’s. Others aren’t quite good enough, and some simply want to concentrate more on academics. Plenty of Johnnie varsity athletes also compete in intramurals—it’s common to see a fall football star in an IM basketball game in the winter. But as an intramural staffer, Rongitsch also reached out in the freshmen dorms to students who weren’t aware of the intramural programs and helped place them with a team. And there is a sport for everyone. Flag football, softball, basketball, kickball, Wiffle Ball, hockey, sand volleyball, indoor soccer … the list goes on. Students can suggest ideas to Alpers and the staff, but facility space and overall interest are also taken into consideration. Some intramural sports have been around for decades while others—like dodgeball—are newer additions. Yes, dodgeball: It’s not just for firing red rubber balls at cowering high school classmates. Inspired by the Ben Stiller movie about the sport, Alpers and his crew started dodgeball leagues. One takes place in the wrestling room, the mats cushioning the falls of the shoeless players who are diving when not attacking. The IM staff also runs a campus-wide dodgeball tournament, pitting residential area against residential area. “We’ll have Mary Two playing against First Tommie or going against the off campusapartment team,” says Alpers, “and there are times when we have 150 kids on the basketball courts playing one game of dodgeball. It’s madness.” Rongitsch and the student staff helped oversee the massive dodgeball tourney. But otherwise intramural games are now self-officiated, the athletes serving as