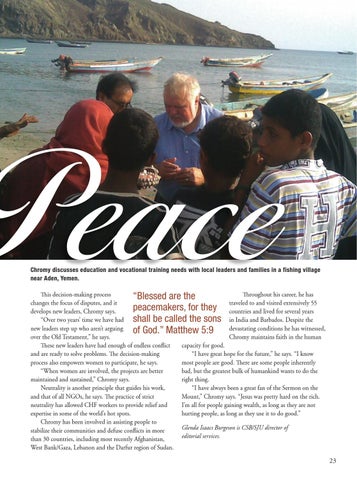 Chromy discusses education and vocational training needs with local leaders and families in a fishing village near Aden, Yemen.

“Blessed are the peacemakers, for they shall be called the sons of God.” Matthew 5:9

This decision-making process changes the focus of disputes, and it develops new leaders, Chromy says. “Over two years’ time we have had new leaders step up who aren’t arguing over the Old Testament,” he says. These new leaders have had enough of endless conflict and are ready to solve problems. The decision-making process also empowers women to participate, he says. “When women are involved, the projects are better maintained and sustained,” Chromy says. Neutrality is another principle that guides his work, and that of all NGOs, he says. The practice of strict neutrality has allowed CHF workers to provide relief and expertise in some of the world’s hot spots. Chromy has been involved in assisting people to stabilize their communities and defuse conflicts in more than 30 countries, including most recently Afghanistan, West Bank/Gaza, Lebanon and the Darfur region of Sudan.

Throughout his career, he has traveled to and visited extensively 55 countries and lived for several years in India and Barbados. Despite the devastating conditions he has witnessed, Chromy maintains faith in the human

capacity for good. “I have great hope for the future,” he says. “I know most people are good. There are some people inherently bad, but the greatest bulk of humankind wants to do the right thing. “I have always been a great fan of the Sermon on the Mount,” Chromy says. “Jesus was pretty hard on the rich. I’m all for people gaining wealth, as long as they are not hurting people, as long as they use it to do good.” Glenda Isaacs Burgeson is CSB/SJU director of editorial services.