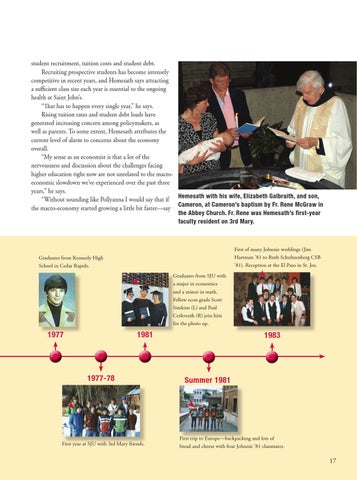 student recruitment, tuition costs and student debt. Recruiting prospective students has become intensely competitive in recent years, and Hemesath says attracting a sufficient class size each year is essential to the ongoing health at Saint John’s. “That has to happen every single year,” he says. Rising tuition rates and student debt loads have generated increasing concern among policymakers, as well as parents. To some extent, Hemesath attributes the current level of alarm to concerns about the economy overall. “My sense as an economist is that a lot of the nervousness and discussion about the challenges facing higher education right now are not unrelated to the macroeconomic slowdown we’ve experienced over the past three years,” he says. Hemesath with his wife, Elizabeth Galbraith, and son, “Without sounding like Pollyanna I would say that if Cameron, at Cameron’s baptism by Fr. Rene McGraw in the macro-economy started growing a little bit faster—say the Abbey Church. Fr. Rene was Hemesath’s first-year faculty resident on 3rd Mary.

First of many Johnnie weddings (Jim Hartman ’81 to Ruth Schultzenberg CSB ’81). Reception at the El Paso in St. Joe.

Graduates from Kennedy High School in Cedar Rapids. Graduates from SJU with a major in economics and a minor in math. Fellow econ grads Scott Simkins (L) and Paul Cerkvenik (R) join him for the photo op.

First trip to Europe—backpacking and lots of bread and cheese with four Johnnie ’81 classmates.