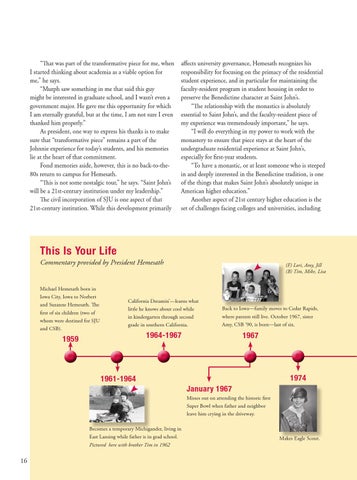 “That was part of the transformative piece for me, when I started thinking about academia as a viable option for me,” he says. “Murph saw something in me that said this guy might be interested in graduate school, and I wasn’t even a government major. He gave me this opportunity for which I am eternally grateful, but at the time, I am not sure I even thanked him properly.” As president, one way to express his thanks is to make sure that “transformative piece” remains a part of the Johnnie experience for today’s students, and his memories lie at the heart of that commitment. Fond memories aside, however, this is no back-to-the80s return to campus for Hemesath. “This is not some nostalgic tour,” he says. “Saint John’s will be a 21st-century institution under my leadership.” The civil incorporation of SJU is one aspect of that 21st-century institution. While this development primarily

affects university governance, Hemesath recognizes his responsibility for focusing on the primacy of the residential student experience, and in particular for maintaining the faculty-resident program in student housing in order to preserve the Benedictine character at Saint John’s. “The relationship with the monastics is absolutely essential to Saint John’s, and the faculty-resident piece of my experience was tremendously important,” he says. “I will do everything in my power to work with the monastery to ensure that piece stays at the heart of the undergraduate residential experience at Saint John’s, especially for first-year students. “To have a monastic, or at least someone who is steeped in and deeply interested in the Benedictine tradition, is one of the things that makes Saint John’s absolutely unique in American higher education.” Another aspect of 21st century higher education is the set of challenges facing colleges and universities, including

This Is Your Life Commentary provided by President Hemesath Michael Hemesath born in Iowa City, Iowa to Norbert and Suzanne Hemesath. The first of six children (two of whom were destined for SJU and CSB).

California Dreamin’—learns what little he knows about cool while in kindergarten through second grade in southern California.

Back to Iowa—family moves to Cedar Rapids, where parents still live. October 1967, sister Amy, CSB ’90, is born—last of six.

1961-1964 January 1967 Misses out on attending the historic first Super Bowl when father and neighbor leave him crying in the driveway. Becomes a temporary Michigander, living in East Lansing while father is in grad school. Pictured here with brother Tim in 1962