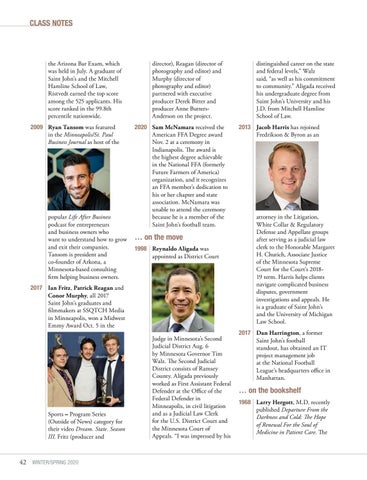 the Arizona Bar Exam, which was held in July. A graduate of Saint John’s and the Mitchell Hamline School of Law, Ristvedt earned the top score among the 525 applicants. His score ranked in the 99.8th percentile nationwide. 2009 Ryan Tansom was featured in the Minneapolis/St. Paul Business Journal as host of the

popular Life After Business podcast for entrepreneurs and business owners who want to understand how to grow and exit their companies. Tansom is president and co-founder of Arkona, a Minnesota-based consulting firm helping business owners.

director), Reagan (director of photography and editor) and Murphy (director of photography and editor) partnered with executive producer Derek Bitter and producer Anne ButtersAnderson on the project. 2020 Sam McNamara received the American FFA Degree award Nov. 2 at a ceremony in Indianapolis. The award is the highest degree achievable in the National FFA (formerly Future Farmers of America) organization, and it recognizes an FFA member’s dedication to his or her chapter and state association. McNamara was unable to attend the ceremony because he is a member of the Saint John’s football team.

… on the move 1998 Reynaldo Aligada was appointed as District Court

2017 Ian Fritz, Patrick Reagan and Conor Murphy, all 2017 Saint John’s graduates and filmmakers at SSQTCH Media in Minneapolis, won a Midwest Emmy Award Oct. 5 in the

distinguished career on the state and federal levels,” Walz said, “as well as his commitment to community.” Aligada received his undergraduate degree from Saint John’s University and his J.D. from Mitchell Hamline School of Law. 2013 Jacob Harris has rejoined Fredrikson &amp; Byron as an

attorney in the Litigation, White Collar &amp; Regulatory Defense and Appellate groups after serving as a judicial law clerk to the Honorable Margaret H. Chutich, Associate Justice of the Minnesota Supreme Court for the Court’s 201819 term. Harris helps clients navigate complicated business disputes, government investigations and appeals. He is a graduate of Saint John’s and the University of Michigan Law School. 2017 Dan Harrington, a former Saint John’s football standout, has obtained an IT project management job at the National Football League’s headquarters office in Manhattan.

… on the bookshelf 1968 Larry Hergott, M.D. recently published Departure From the Darkness and Cold: The Hope of Renewal For the Soul of Medicine in Patient Care. The