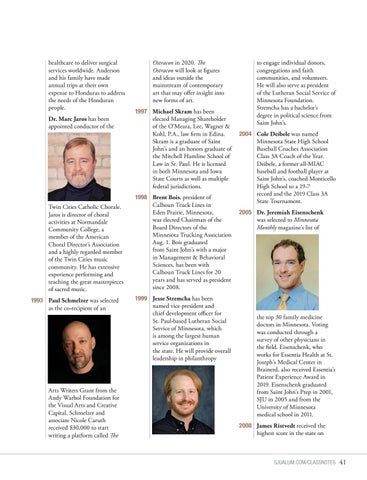 healthcare to deliver surgical services worldwide. Anderson and his family have made annual trips at their own expense to Honduras to address the needs of the Honduran people. Dr. Marc Jaros has been appointed conductor of the

Twin Cities Catholic Chorale. Jaros is director of choral activities at Normandale Community College, a member of the American Choral Director’s Association and a highly regarded member of the Twin Cities music community. He has extensive experience performing and teaching the great masterpieces of sacred music. 1993 Paul Schmelzer was selected as the co-recipient of an

Arts Writers Grant from the Andy Warhol Foundation for the Visual Arts and Creative Capital. Schmelzer and associate Nicole Caruth received $30,000 to start writing a platform called The

Ostracon in 2020. The Ostracon will look at figures and ideas outside the mainstream of contemporary art that may offer insight into new forms of art. 1997 Michael Skram has been elected Managing Shareholder of the O’Meara, Lee, Wagner &amp; Kohl, P.A., law firm in Edina. Skram is a graduate of Saint John’s and an honors graduate of the Mitchell Hamline School of Law in St. Paul. He is licensed in both Minnesota and Iowa State Courts as well as multiple federal jurisdictions. 1998 Brent Bois, president of Calhoun Truck Lines in Eden Prairie, Minnesota, was elected Chairman of the Board Directors of the Minnesota Trucking Association Aug. 1. Bois graduated from Saint John’s with a major in Management &amp; Behavioral Sciences, has been with Calhoun Truck Lines for 20 years and has served as president since 2008. 1999 Jesse Stremcha has been named vice president and chief development officer for St. Paul-based Lutheran Social Service of Minnesota, which is among the largest human service organizations in the state. He will provide overall leadership in philanthropy

to engage individual donors, congregations and faith communities, and volunteers. He will also serve as president of the Lutheran Social Service of Minnesota Foundation. Stremcha has a bachelor’s degree in political science from Saint John’s. 2004 Cole Deibele was named Minnesota State High School Baseball Coaches Association Class 3A Coach of the Year. Deibele, a former all-MIAC baseball and football player at Saint John’s, coached Monticello High School to a 19-7 record and the 2019 Class 3A State Tournament. 2005 Dr. Jeremiah Eisenschenk was selected to Minnesota Monthly magazine’s list of

the top 30 family medicine doctors in Minnesota. Voting was conducted through a survey of other physicians in the field. Eisenschenk, who works for Essentia Health at St. Joseph’s Medical Center in Brainerd, also received Essentia’s Patient Experience Award in 2019. Eisenschenk graduated from Saint John’s Prep in 2001, SJU in 2005 and from the University of Minnesota medical school in 2011. 2008 James Ristvedt received the highest score in the state on