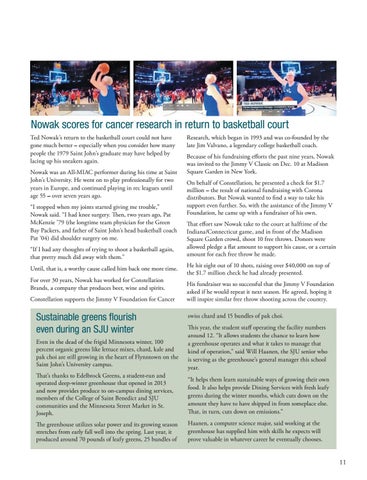 Nowak scores for cancer research in return to basketball court Ted Nowak’s return to the basketball court could not have gone much better – especially when you consider how many people the 1979 Saint John’s graduate may have helped by lacing up his sneakers again. Nowak was an All-MIAC performer during his time at Saint John’s University. He went on to play professionally for two years in Europe, and continued playing in rec leagues until age 55 – over seven years ago. “I stopped when my joints started giving me trouble,” Nowak said. “I had knee surgery. Then, two years ago, Pat McKenzie ’79 (the longtime team physician for the Green Bay Packers, and father of Saint John’s head basketball coach Pat ’04) did shoulder surgery on me. “If I had any thoughts of trying to shoot a basketball again, that pretty much did away with them.” Until, that is, a worthy cause called him back one more time. For over 30 years, Nowak has worked for Constellation Brands, a company that produces beer, wine and spirits. Constellation supports the Jimmy V Foundation for Cancer

Sustainable greens flourish even during an SJU winter Even in the dead of the frigid Minnesota winter, 100 percent organic greens like lettuce mixes, chard, kale and pak choi are still growing in the heart of Flynntown on the Saint John’s University campus.

Research, which began in 1993 and was co-founded by the late Jim Valvano, a legendary college basketball coach. Because of his fundraising efforts the past nine years, Nowak was invited to the Jimmy V Classic on Dec. 10 at Madison Square Garden in New York. On behalf of Constellation, he presented a check for $1.7 million – the result of national fundraising with Corona distributors. But Nowak wanted to find a way to take his support even further. So, with the assistance of the Jimmy V Foundation, he came up with a fundraiser of his own. That effort saw Nowak take to the court at halftime of the Indiana/Connecticut game, and in front of the Madison Square Garden crowd, shoot 10 free throws. Donors were allowed pledge a flat amount to support his cause, or a certain amount for each free throw he made. He hit eight out of 10 shots, raising over $40,000 on top of the $1.7 million check he had already presented. His fundraiser was so successful that the Jimmy V Foundation asked if he would repeat it next season. He agreed, hoping it will inspire similar free throw shooting across the country. swiss chard and 15 bundles of pak choi. This year, the student staff operating the facility numbers around 12. “It allows students the chance to learn how a greenhouse operates and what it takes to manage that kind of operation,” said Will Haanen, the SJU senior who is serving as the greenhouse’s general manager this school year.

That’s thanks to Edelbrock Greens, a student-run and operated deep-winter greenhouse that opened in 2013 and now provides produce to on-campus dining services, members of the College of Saint Benedict and SJU communities and the Minnesota Street Market in St. Joseph.

“It helps them learn sustainable ways of growing their own food. It also helps provide Dining Services with fresh leafy greens during the winter months, which cuts down on the amount they have to have shipped in from someplace else. That, in turn, cuts down on emissions.”

The greenhouse utilizes solar power and its growing season stretches from early fall well into the spring. Last year, it produced around 70 pounds of leafy greens, 25 bundles of

Haanen, a computer science major, said working at the greenhouse has supplied him with skills he expects will prove valuable in whatever career he eventually chooses.