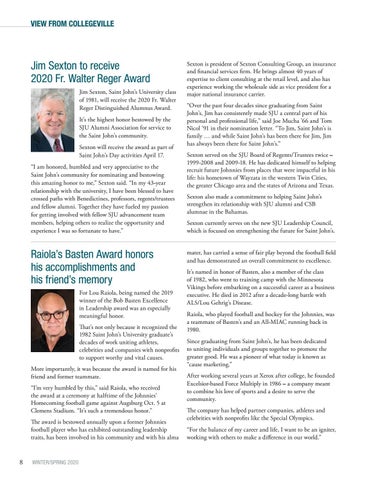 Jim Sexton to receive 2020 Fr. Walter Reger Award Jim Sexton, Saint John’s University class of 1981, will receive the 2020 Fr. Walter Reger Distinguished Alumnus Award. It’s the highest honor bestowed by the SJU Alumni Association for service to the Saint John’s community. Sexton will receive the award as part of Saint John’s Day activities April 17. “I am honored, humbled and very appreciative to the Saint John’s community for nominating and bestowing this amazing honor to me,” Sexton said. “In my 43-year relationship with the university, I have been blessed to have crossed paths with Benedictines, professors, regents/trustees and fellow alumni. Together they have fueled my passion for getting involved with fellow SJU advancement team members, helping others to realize the opportunity and experience I was so fortunate to have.”

Raiola’s Basten Award honors his accomplishments and his friend’s memory For Lou Raiola, being named the 2019 winner of the Bob Basten Excellence in Leadership award was an especially meaningful honor. That’s not only because it recognized the 1982 Saint John’s University graduate’s decades of work uniting athletes, celebrities and companies with nonprofits to support worthy and vital causes. More importantly, it was because the award is named for his friend and former teammate. “I’m very humbled by this,” said Raiola, who received the award at a ceremony at halftime of the Johnnies’ Homecoming football game against Augsburg Oct. 5 at Clemens Stadium. “It’s such a tremendous honor.” The award is bestowed annually upon a former Johnnies football player who has exhibited outstanding leadership traits, has been involved in his community and with his alma

Sexton is president of Sexton Consulting Group, an insurance and financial services firm. He brings almost 40 years of expertise to client consulting at the retail level, and also has experience working the wholesale side as vice president for a major national insurance carrier. “Over the past four decades since graduating from Saint John’s, Jim has consistently made SJU a central part of his personal and professional life,” said Joe Mucha ’66 and Tom Nicol ’91 in their nomination letter. “To Jim, Saint John’s is family … and while Saint John’s has been there for Jim, Jim has always been there for Saint John’s.” Sexton served on the SJU Board of Regents/Trustees twice – 1999-2008 and 2009-18. He has dedicated himself to helping recruit future Johnnies from places that were impactful in his life: his hometown of Wayzata in the western Twin Cities, the greater Chicago area and the states of Arizona and Texas. Sexton also made a commitment to helping Saint John’s strengthen its relationship with SJU alumni and CSB alumnae in the Bahamas. Sexton currently serves on the new SJU Leadership Council, which is focused on strengthening the future for Saint John’s. mater, has carried a sense of fair play beyond the football field and has demonstrated an overall commitment to excellence. It’s named in honor of Basten, also a member of the class of 1982, who went to training camp with the Minnesota Vikings before embarking on a successful career as a business executive. He died in 2012 after a decade-long battle with ALS/Lou Gehrig’s Disease. Raiola, who played football and hockey for the Johnnies, was a teammate of Basten’s and an All-MIAC running back in 1980. Since graduating from Saint John’s, he has been dedicated to uniting individuals and groups together to promote the greater good. He was a pioneer of what today is known as “cause marketing.” After working several years at Xerox after college, he founded Excelsior-based Force Multiply in 1986 – a company meant to combine his love of sports and a desire to serve the community. The company has helped partner companies, athletes and celebrities with nonprofits like the Special Olympics. “For the balance of my career and life, I want to be an igniter, working with others to make a difference in our world.”