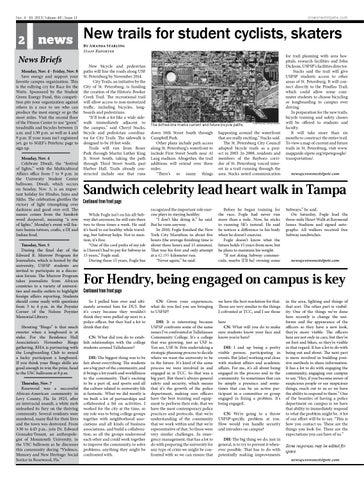 New trails for student cyclists, skaters News Briefs Monday, Nov. 4 - Friday, Nov. 8 Save energy and support your favorite campus organization. This is the rallying cry for Race for the Watts. Sponsored by the Student Green Energy Fund, this competition pits your organization against others in a race to see who can produce the most energy or go the most miles. Visit the second floor of the Fitness Center to use “green” treadmills and bicycles between 11 a.m. and 1:30 p.m. as well as 4 and 9 p.m. If your team isn’t registered yet, go to SGEF’s PeteSync page to sign up. Monday, Nov. 4 Celebrate Diwali, the “festival of lights,” with the Multicultural Affairs office from 7 to 9 p.m. in the University Student Center ballroom. Diwali, which occurs on Sunday, Nov. 3, is an important holiday for Hindus, Jains and Sikhs. The celebration glorifies the victory of light triumphing over darkness and good over evil. The names comes from the Sanskrit word deepavali, meaning “a row of lights.” Monday’s event will feature henna tattoos, crafts, a DJ and Indian food. Tuesday, Nov. 5 During the final day of the Edward R. Murrow Program for Journalists, which is hosted by the university, USFSP students are invited to participate in a discussion forum. The Murrow Program takes journalists from African countries to a variety of universities and media outlets to highlight foreign affairs reporting. Students should come ready with questions from 3 to 4 p.m. in the Poynter Corner of the Nelson Poynter Memorial Library. Shouting “Bingo” is that much sweeter when a longboard is at stake. For the Residence Hall Association’s November Bingo gathering, RHA is partnering with the Longboarding Club to award a lucky participant a longboard. If you think your Bingo skills are good enough to win the prize, head to the USC ballroom at 8 p.m. Thursday, Nov. 7 Rosewood was a successful African-American community in Levy County, Fla. In 1923, after an interracial assault, a white mob unleashed its fury on the thriving community. Several residents were murdered, many fled for their lives and the town was destroyed. From 3:30 to 4:45 p.m., join Dr. Edward Gonzalez-Tenant, an anthropologist of Monmouth University, in the USC ballroom as he discusses this community during “Violence, Memory and New Heritage: Social Justice in Rosewood, Fla.”

New bicycle and pedestrian paths will line the roads along USF St. Petersburg by November 2014. City Trails, an initiative by the City of St. Petersburg, is funding the creation of the Historic Booker Creek Trail. The recreational trail will allow access to non-motorized traffic, including bicycles, longboards and pedestrians. “It’ll look a lot like a wide sidewalk immediately adjacent to the campus,” said Cheryl Stacks, bicycle and pedestrian coordinator for City Trails. The sidewalk is designed to be 10 feet wide. Trails will run from Roser Park through Martin Luther King Jr. Street South, taking the path through Third Street South, past Harbor Hall. Trails already constructed include one that runs

down 16th Street South through Campbell Park. Other plans include path access along St. Petersburg’s waterfront to include First Street South near Al Lang stadium. Altogether, the trail additions will extend over three miles. “There’s so many things

happening around the waterfront that are really exciting,” Stacks said. The St. Petersburg City Council adopted bicycle trails as a project in 2003. In 2008, residents and members of the Bayboro corridor of St. Petersburg voiced interest in a trail running through the area. Stacks noted communication

for trail planning with area hospitals, research facilities and John Dickson, USFSP’s facilities director. Stacks said the trail will give USFSP students access to other areas of St. Petersburg. It will connect directly to the Pinellas Trail, which could allow some commuter students to choose bicycling or longboarding to campus over driving. In preparation for the new trails, bicycle training and safety classes will be offered to students and faculty. It will take more than six months to construct the entire trail. To view a map of current and future trails in St. Petersburg, visit www. mapguide.stpete.org/stpetegoogle/ transportation/. news@crowsneststpete.com

Sandwich celebrity lead heart walk in Tampa Continued from front page While Fogle isn’t on his all-Subway diet anymore, he still eats there two to three times a week. He said it’s hard to eat healthy while traveling, but Subway helps. Not to mention, it’s free. “One of the cool perks of my job is I haven’t had to pay for Subway in 15 years,” Fogle said. During these 15 years, Fogle has

recognized the important role exercise plays in staying healthy. “I don’t like doing it,” he said. But he runs anyway. In 2010, Fogle finished the New York City Marathon in about five hours (the average finishing time is about three hours and 15 minutes). That was his first and only attempt at a 42.195-kilometer run. “Never again,” he said.

Before he began training for the race, Fogle had never run more than a mile. Now, he sticks to running 5K’s instead. He said he notices a difference in his body when he doesn’t exercise. Fogle doesn’t know what the future holds 15 years from now, but he plans to maintain his weight. “If not doing Subway commercials, maybe [I’ll be] owning some

For Hendry, being engaged on campus is key Continued from front page So I pulled him over and ultimately arrested him for DUI. But it’s crazy because they wouldn’t think they were pulled up next to a police officer, but they had a lot to drink that day. CN: What did you do to establish relationships with the college students around Tallahassee? DH: The biggest thing was to be fair about everything. The students are a big part of the community, and it brings a lot youth and worldliness to the community. That’s exciting to be a part of, and sports and all the culture related to university life is fantastic. What we did mostly is we built a lot of partnerships and collaborated a bit on activities. I worked for the city at the time, so my role was to bring college groups together with neighborhood associations and all kinds of business associations, and build a collaboration, so all the groups understood each other and could work together to improve the community, to solve problems, anything they might be confronted with.

CN: Given your experiences, what do you feel you are bringing to USFSP?

we have the best resolution for that. Those are very similar to the things I cofronted at TCC, and I see those

DH: It is interesting because USFSP confronts some of the same issues I’ve confronted at Tallahassee Community College. It’s a college that was growing, just as USF is. You see, USF St. Pete undertaking a strategic planning process to decide where we want the university to be in the future. It’s kind of the same process we were involved in and engaged in at TCC. So that was a big part. But there’s always general safety and security, which means that it’s the growth of the police department, making sure officers have the best training and equipment to perform their role, that we have the most contemporary police practices and protocols, that we’re understanding of the community that we work within and that we’re representative of that. So those were very similar challenges. In emergency management, that has a lot to do with preparing the university for any type of crisis we might be confronted with so we can ensure that

here CN: What will you do to make sure students know your face and know you’re here? DH: I end up being a pretty visible person, participating in events. But [also] working real close with student affairs and academic affairs. For me, it’s all about being engaged in the process and in the community. So sometimes that can be simply a presence and sometimes that can be an active participant in a committee or group engaged in fixing a problem. It’s being engaged. CN: We’re going to a throw USFSP-specific problem at you. How would you handle security and intruders on campus? DH: The big thing we do, just in general, is to try to prevent it whenever possible. That has to do with potentially making improvements

in the area, lighting and things of that sort. The other part is visibility. One of the things we’ve done here recently is change the uniforms and the appearance of the officers so they have a new look, they’re more visible. The officers here are not only in cars, but they’re on foot and bikes, so they’re visible in that regard. It has a lot to do with being out and about. The next part is more involved in building positive methods to share information. It has a lot to do with engaging the community, engaging our campus to say, “Hey, if you become aware of suspicious people or see suspicious things, reach out to us so we have the ability to respond to them.” One of the beauties of having a police department on campus is we have that ability to immediately respond to what the problem might be. A lot of our effort will be to say, “This is how you contact us. These are the things you look for. These are the expectations you can have of us.” Some responses may be edited for space. news@crowsneststpete.com 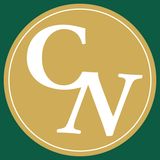