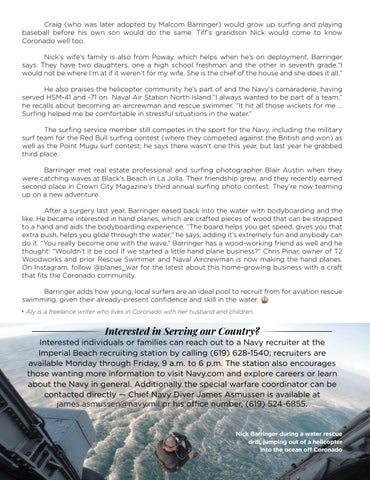 Craig (who was later adopted by Malcom Barringer) would grow up surfing and playing baseball before his own son would do the same. Tiff’s grandson Nick would come to know Coronado well too. Nick’s wife’s family is also from Poway, which helps when he’s on deployment, Barringer says. They have two daughters, one a high school freshman and the other in seventh grade.“I would not be where I’m at if it weren’t for my wife. She is the chief of the house and she does it all.” He also praises the helicopter community he’s part of and the Navy’s camaraderie, having served HSM-41 and -71 on Naval Air Station North Island.“I always wanted to be part of a team,” he recalls about becoming an aircrewman and rescue swimmer. “It hit all those wickets for me … Surfing helped me be comfortable in stressful situations in the water.” The surfing service member still competes in the sport for the Navy, including the military surf team for the Red Bull surfing contest (where they competed against the British and won) as well as the Point Mugu surf contest; he says there wasn’t one this year, but last year he grabbed third place. Barringer met real estate professional and surfing photographer Blair Austin when they were catching waves at Black’s Beach in La Jolla. Their friendship grew, and they recently earned second place in Crown City Magazine’s third annual surfing photo contest. They’re now teaming up on a new adventure. After a surgery last year, Barringer eased back into the water with bodyboarding and the like. He became interested in hand planes, which are crafted pieces of wood that can be strapped to a hand and aids the bodyboarding experience. “The board helps you get speed, gives you that extra push, helps you glide through the water,” he says, adding it’s extremely fun and anybody can do it. “You really become one with the wave.” Barringer has a wood-working friend as well and he thought: “Wouldn’t it be cool if we started a little hand plane business?” Chris Pinar, owner of T2 Woodworks and prior Rescue Swimmer and Naval Aircrewman is now making the hand planes. On Instagram, follow @planes_war for the latest about this home-growing business with a craft that fits the Coronado community. Barringer adds how young, local surfers are an ideal pool to recruit from for aviation rescue swimming, given their already-present confidence and skill in the water. • Aly is a freelance writer who lives in Coronado with her husband and children.

Interested in Serving our Country? Interested individuals or families can reach out to a Navy recruiter at the Imperial Beach recruiting station by calling (619) 628-1540; recruiters are available Monday through Friday, 9 a.m. to 6 p.m. The station also encourages those wanting more information to visit Navy.com and explore careers or learn about the Navy in general. Additionally the special warfare coordinator can be contacted directly — Chief Navy Diver James Asmussen is available at james.asmussen@navy.mil or his office number, (619) 524-6855.

Nick Barringer during a water rescue drill, jumping out of a helicopter into the ocean off Coronado 24

This is a very special issue - it is a tribute to our military for Veterans Day & also has themes of family, Thanksgiving, shop local & giving back will be woven in. 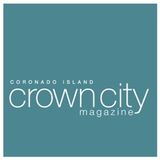