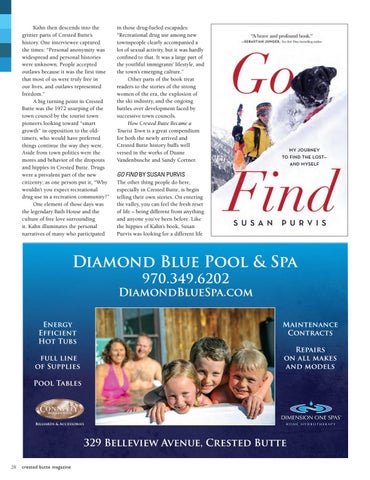 Kahn then descends into the grittier parts of Crested Butte’s history. One interviewee captured the times: “Personal anonymity was widespread and personal histories were unknown. People accepted outlaws because it was the first time that most of us were truly free in our lives, and outlaws represented freedom.” A big turning point in Crested Butte was the 1972 usurping of the town council by the tourist town pioneers looking toward “smart growth” in opposition to the oldtimers, who would have preferred things continue the way they were. Aside from town politics were the mores and behavior of the dropouts and hippies in Crested Butte. Drugs were a prevalent part of the new citizenry; as one person put it, “Why wouldn’t you expect recreational drug use in a recreation community?” One element of those days was the legendary Bath House and the culture of free love surrounding it. Kahn illuminates the personal narratives of many who participated

in those drug-fueled escapades: “Recreational drug use among new townspeople clearly accompanied a lot of sexual activity, but it was hardly confined to that. It was a large part of the youthful immigrants’ lifestyle, and the town’s emerging culture.” Other parts of the book treat readers to the stories of the strong women of the era, the explosion of the ski industry, and the ongoing battles over development faced by successive town councils. How Crested Butte Became a Tourist Town is a great compendium for both the newly arrived and Crested Butte history buffs well versed in the works of Duane Vandenbusche and Sandy Cortner.

GO FIND BY SUSAN PURVIS The other thing people do here, especially in Crested Butte, is begin telling their own stories. On entering the valley, you can feel the fresh reset of life – being different from anything and anyone you’ve been before. Like the hippies of Kahn’s book, Susan Purvis was looking for a different life

Maintenance Contracts Repairs on all makes and models