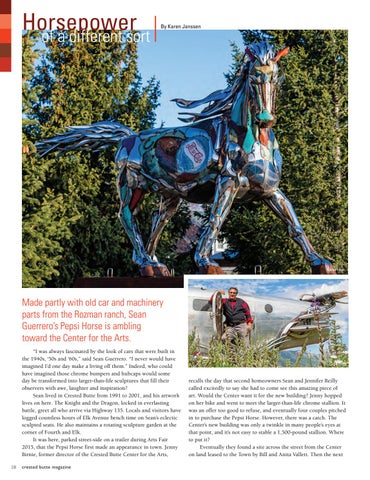 of a different sort

Made partly with old car and machinery parts from the Rozman ranch, Sean Guerrero’s Pepsi Horse is ambling toward the Center for the Arts. “I was always fascinated by the look of cars that were built in the 1940s, ‘50s and ‘60s,” said Sean Guerrero. “I never would have imagined I’d one day make a living off them.” Indeed, who could have imagined those chrome bumpers and hubcaps would some day be transformed into larger-than-life sculptures that fill their observers with awe, laughter and inspiration? Sean lived in Crested Butte from 1991 to 2001, and his artwork lives on here. The Knight and the Dragon, locked in everlasting battle, greet all who arrive via Highway 135. Locals and visitors have logged countless hours of Elk Avenue bench time on Sean’s eclectic sculpted seats. He also maintains a rotating sculpture garden at the corner of Fourth and Elk. It was here, parked street-side on a trailer during Arts Fair 2015, that the Pepsi Horse first made an appearance in town. Jenny Birnie, former director of the Crested Butte Center for the Arts, 18

recalls the day that second homeowners Sean and Jennifer Reilly called excitedly to say she had to come see this amazing piece of art. Would the Center want it for the new building? Jenny hopped on her bike and went to meet the larger-than-life chrome stallion. It was an offer too good to refuse, and eventually four couples pitched in to purchase the Pepsi Horse. However, there was a catch. The Center’s new building was only a twinkle in many people’s eyes at that point, and it’s not easy to stable a 1,500-pound stallion. Where to put it? Eventually they found a site across the street from the Center on land leased to the Town by Bill and Anita Vallett. Then the next