Fairness in the First Year? 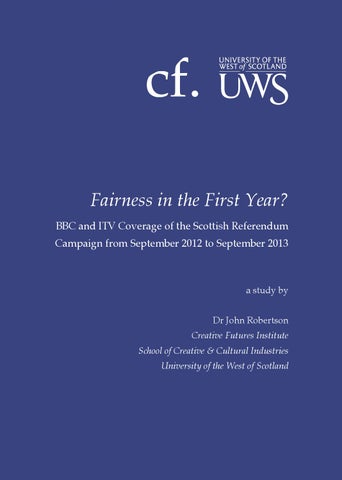 Fairness in the First Year? BBC and ITV Coverage of the Scottish Referendum Campaign from September 2012 to September 2013

CITATION: Robertson, J. (2014) Fairness in the First Year? BBC and ITV Coverage of the Scottish Referendum Campaign from September 2012 to September 2013. Available Online at: http://creativefutur.eu/

Dr John Robertson is Reader in Media Politics at the Creative Futures Institute, located within the School of Creative &amp; Cultural Industries at the University of the West of Scotland. His background is as a sociologist and educational technologist and his teaching experience covers, in particular, learning theories, technology-based education and the critical analysis of socioeconomic change. John’s research experience concentrates on news media with particular emphasis on conflict, democracy, citizenship and disability. His research writing has been published in a wide range of high-status journals, paper-based and online, including the European Journal of Communications and Learning, Media and Technology.

September 2014. They will be asked ‘Should Scotland be an independent country? Yes or No.’ The Referendum Bill was introduced to the Scottish Parliament on 21 March 2013. st

every evening (6-7pm) broadcast by BBC 1, Reporting Scotland, ITV and STV, in that period. A total, therefore, of approximately 730 hours, minus advertising breaks in ITV and STV broadcasts, was watched, transcribed and coded. The evening TV broadcasts were chosen as the news media communications with the largest audiences in Scotland and in the UK. The distribution and quantity of messages of different types is presented in a tabular format with selected text examples to illustrate types of message.

The researchers, at the University of the West of Scotland, sought to disengage themselves as much as possible from the surrounding debate, in extended newspaper articles or TV debates, with a view to as objective an assessment as is possible given the inevitably ideological, contested and subjective nature of the topic. Consequently, we do not indulge, here, in an extended discussion of the history and politics of Scottish independence, the early analysis by journalists, nor do we debate the advantages or disadvantages proposed by the Yes and No campaigns.

Our purpose, rather, is to answer these questions which emerged as prevalent issues from first and second readings of the transcripts:

A content analysis of the relative presence of types of political message contained within broadcasts in the first year of the Scottish Independence Referendum campaigns applied the following coding categories which emerged from pilot coding exercises:

The term ‘statement’ referring to the unit of measurement in this research means a sentence or cluster of sentences from one source demarcated by clear space between it and a prior sentence/cluster from a different source and by a clear space between it and a subsequent sentence/cluster. No attempt was made in this approach to discriminate between statements of different word lengths or between one and two or more sentence clusters. The nature of these broadcasts was such that statements were rarely more than one sentence in length with the

Personalisation of ideas as A S

Abusive of A nti-­‐independence figures

Finishing with A nti evidence unchallenged

Personalisation of ideas as BT individuals

Figure1: Total and average figures for each coded category

The above table presents data which can be used to reveal the distribution, over 12 months, of different types of message within broadcasts, allows comparison of the relative presence of each category and enables comparison between channels for the same categories.

News reports relating to the referendum were fairly regular occurrences on the two Scottish channels over the twelve months. In sharp contrast the UK-wide broadcasts rarely reported on this topic. The BBC1 figures are inflated by the Reporting Scotland headline alerts which followed the ‘national’ headlines and which were only seen in Scotland. This apparent disinterest in a major constitutional challenge to the very existence of the UK, by its two dominant news programmes, is the first observation to be taken from the above data.

o On 20/5/13 in STV at 6, the presenter announced ‘Scots’ savers and financial institutions might be at risk if country votes for independence o On 29/10/12 in Reporting Scotland, an extensive piece on Trident and on Scotland’s defence forces after independence offers some space for SNP response but is driven by a weight of one-sided and unchallenged evidence and commentary – unnamed economic advisers are allowed to suggest 6500 jobs lost if Trident goes and an overall cost of £20bn while the

report finishes ominously with ‘Whitehall could play hardball’. o On 11/12/12, in Reporting Scotland, the programme opens with ‘Row over independence could lead to higher electricity bills’ then runs through a series of negative sound bites interspersed with SNP protest – ‘questions mount over independence’, ‘UK government claims cost could rise’, ‘Could Scots customers have to pay more?’, ‘Labour spokesman – danger’ before allowing the evidence of Scottish over-production, renewables and a captive market in England to cast serious doubt on the motivation for the initial headline ‘scare’.

Health-related matters were the other dominant theme. For example, on 27/9/12 the case of a Scottish patient seeking free cancer drug treatment only available in England was highlighted and linked to the relative lack of GP control in Scotland. This began a mini-series of reports on alleged failings in the Scottish NHS by Reporting Scotland reporters and by Labour spokespersons. No balancing cases were reported of a flow in the other direction although such did appear in the popular press (‘Now English asthma patients are denied life-changing drug offered to Scots’, Daily Mail, 9/11/12). The use of single cases to suggest wider concerns is of course problematic.

Less typical but of interest in this evaluation of editorial decision making was:

o On 24/6/13 in STV at 6, the presenter, referring to a report from the ‘Scottish Institute’ offers unchallenged the notion that the Scottish armed forces ‘might have trouble recruiting due to lack of adventure’! The possibility of the reverse trend is not considered.

The use of evidence from sources other than the parties themselves and which might be presented as ‘independent’, ‘academic’ or ‘scientific’ is a measure of quality in political debate. Notably, there was very little use of such evidence in the reporting overall and, where there was, there was clear tendency to use antiindependence over pro-independence evidence. Though a rare phenomenon overall, reporting tended to link pro-independence evidence from Scottish Government sponsored committees to their sponsorship while UK advisory groups such as the Office for Budget Responsibility, The Institute for Fiscal Studies and several Parliamentary, Treasury, or House of Lords committees were typically treated as independent despite linkages to UK government and other government departments or units with a vested interest in the union. Indeed the IFS was referred to as a ‘well-respected think tank’ (Reporting Scotland, 19/11/12) whereas a Glasgow University academic was ‘outed’ as having been ‘bought’ by the SNP to support the independence case (Reporting Scotland, 21/8/13).

The sequence of statements whereby anti-independence arguments preceded pro-independence responses as opposed to the reverse order is of interest. There was a clear majority (66:24) of the former, on Reporting Scotland where ‘bad news’ about independence came first and obliged a defensive response from a pro-

Personalisation of political issues is long-established strategy to weaken arguments, shifting focus from collective reasoning or shared values to supposed personal desires and personality traits. Historically, this tendency or strategy has been used to demonise and to undermine numerous political figures in the UK including Michael Foot and Neil Kinnock. In the above data, the repeated association of the Yes/pro-independence campaign with the personal desires of Alex Salmond was regular and frequent. No such equation between No/antiindependence figures’ personal drives and the No campaign was made. Likewise the broadcasting of personally insulting comments by antiindependence representatives (especially Johann Lamont) aimed at Alex Salmond, almost entirely, was predominant though a few counter-jibes by Salmond against Lamont and the Labour Party did also occur. Notably the use of insults aimed at Salmond declined and had become less common in the second six months of the survey. The tendency by opposition politicians to attempt to undermine the Yes campaign by labelling its ambitions as Alex Salmond’s desires is, in part, beyond the editorial role, however, it was common for reporters and presenters to adopt the same style:

The distillation of the debate over independence into a largely economic debate was also clear. Particularly notable is the role, here, of political editors in framing the debate in this way, telling the viewer that the debate over living standards, employment and taxation was the only debate anyone cared about. No evidence for this view was given.

The closing statements in reports might be felt to leave a lingering impression and thus carry more weight than some others. In many cases, reporters would round-off with a compromise assessment so as to leave the two campaigns in a kind of balance. Quite often, however, a statement strongly supportive of one side would be left hanging as the final thought. This was more likely, especially on Reporting Scotland, to be an anti-independence statement such as:

o On 27/9/12, in Reporting Scotland, a piece on the changes to the NHS in England was used to suggest that the Scottish system’s reluctance to change ‘is bad news for Scotland’ and finishes with the unsubstantiated suggestion that GPs and patients might be ‘planning to move to England’.

o On 5/10/12, in Reporting Scotland, the Scottish Government’s commitment to universal benefits was immediately followed by a reference to ‘spending watchdog chief Robert Black who has questioned whether such benefits are affordable’ and reinforced by reference to Black’s cv –‘few people are better placed to understand the challenges’. o On 26/4/13, in Reporting Scotland, a generally negative assessment of the future of insurance companies after independence finished with the Labour spokesperson’s assertion of ‘billions in costs’ and ‘potential closures’. o On 9/1/13, in STV News, after an extended and mostly negative report on the SNP’s ‘antinuclear stance’ the presenter finishes by suggesting that the latter ‘will lead to economic disaster’.

Comparing Reporting Scotland with STV News, the former seems less balanced and fair to the Yes campaign if only in the tendency to give proindependence statements a greater frequency of opening and closing debates. Overall, however, both feature a preponderance of antiindependence statements, a majority of anti-independence evidence and a heavy personalisation of the debate around the character of Alex Salmond with the latter often portrayed as selfish and undemocratic. However, If we characterise viewers as likely to watch both BBC 1 and Reporting Scotland or both STV and ITV News, in succession, the two experiences diverge further than is apparent in comparing one

programme with another. The BBC1, Reporting Scotland alerts are commonly short and punchy with an attack, typically a Westminster scare story, on the Yes campaign, mostly left unanswered and unchallenged.

So, on the objective evidence presented here, the mainstream TV coverage of the first year of the independence referendum campaigns has not been fair or balanced. Taken together, we have evidence of coverage which seems likely to have damaged the Yes campaign.

Fairness in the First Year?

BBC and ITV Coverage of the Scottish Referendum Campaign from September 2012 to September 2013, by Dr John Robertson, Creative Futures Institute, University of the West of Scotland 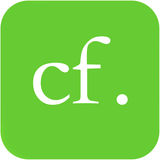