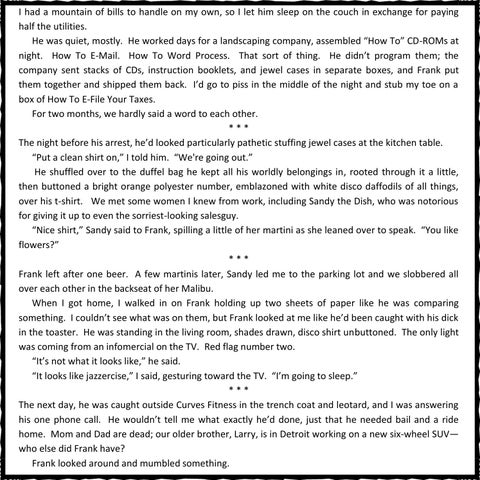 I had a mountain of bills to handle on my own, so I let him sleep on the couch in exchange for paying half the utilities. He was quiet, mostly. He worked days for a landscaping company, assembled “How To” CD-ROMs at night. How To E-Mail. How To Word Process. That sort of thing. He didn’t program them; the company sent stacks of CDs, instruction booklets, and jewel cases in separate boxes, and Frank put them together and shipped them back. I’d go to piss in the middle of the night and stub my toe on a box of How To E-File Your Taxes. For two months, we hardly said a word to each other. *** The night before his arrest, he’d looked particularly pathetic stuffing jewel cases at the kitchen table. “Put a clean shirt on,” I told him. “We're going out.” He shuffled over to the duffel bag he kept all his worldly belongings in, rooted through it a little, then buttoned a bright orange polyester number, emblazoned with white disco daffodils of all things, over his t-shirt. We met some women I knew from work, including Sandy the Dish, who was notorious for giving it up to even the sorriest-looking salesguy. “Nice shirt,” Sandy said to Frank, spilling a little of her martini as she leaned over to speak. “You like flowers?” *** Frank left after one beer. A few martinis later, Sandy led me to the parking lot and we slobbered all over each other in the backseat of her Malibu. When I got home, I walked in on Frank holding up two sheets of paper like he was comparing something. I couldn’t see what was on them, but Frank looked at me like he’d been caught with his dick in the toaster. He was standing in the living room, shades drawn, disco shirt unbuttoned. The only light was coming from an infomercial on the TV. Red flag number two. “It’s not what it looks like,” he said. “It looks like jazzercise,” I said, gesturing toward the TV. “I’m going to sleep.” *** The next day, he was caught outside Curves Fitness in the trench coat and leotard, and I was answering his one phone call. He wouldn’t tell me what exactly he’d done, just that he needed bail and a ride home. Mom and Dad are dead; our older brother, Larry, is in Detroit working on a new six-wheel SUV— who else did Frank have? Frank looked around and mumbled something.