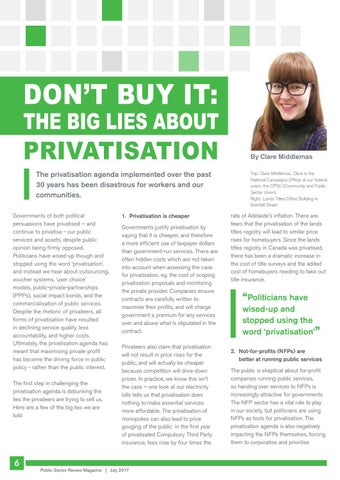 THE BIG LIES ABOUT

PRIVATISATION The privatisation agenda implemented over the past 30 years has been disastrous for workers and our communities. Governments of both political persuasions have privatised – and continue to privatise - our public services and assets, despite public opinion being firmly opposed. Politicians have wised-up though and stopped using the word ‘privatisation’, and instead we hear about outsourcing, voucher systems, ‘user choice’ models, public-private-partnerships (PPPs), social impact bonds, and the commercialisation of public services. Despite the rhetoric of privateers, all forms of privatisation have resulted in declining service quality, less accountability, and higher costs. Ultimately, the privatisation agenda has meant that maximising private profit has become the driving force in public policy - rather than the public interest. The first step in challenging the privatisation agenda is debunking the lies the privateers are trying to sell us. Here are a few of the big lies we are told:

1. Privatisation is cheaper Governments justify privatisation by saying that it is cheaper, and therefore a more efficient use of taxpayer dollars than government-run services. There are often hidden costs which are not taken into account when assessing the case for privatisation, eg. the cost of scoping privatisation proposals and monitoring the private provider. Companies ensure contracts are carefully written to maximise their profits, and will charge government a premium for any services over and above what is stipulated in the contract. Privateers also claim that privatisation will not result in price rises for the public, and will actually be cheaper because competition will drive down prices. In practice, we know this isn’t the case – one look at our electricity bills tells us that privatisation does nothing to make essential services more affordable. The privatisation of monopolies can also lead to price gouging of the public: in the first year of privatisated Compulsory Third Party insurance, fees rose by four times the

2. Not-for-profits (NFPs) are better at running public services The public is skeptical about for-profit companies running public services, so handing over services to NFPs is increasingly attractive for governments. The NFP sector has a vital role to play in our society, but politicians are using NFPs as tools for privatisation. The privatisation agenda is also negatively impacting the NFPs themselves, forcing them to corporatise and prioritise 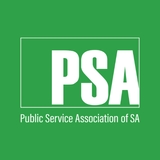