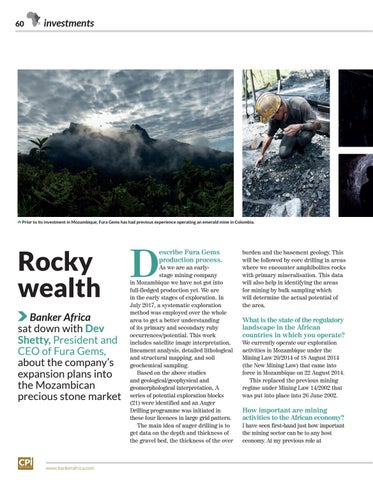 Prior to its investment in Mozambique, Fura Gems has had previous experience operating an emerald mine in Colombia.

Rocky wealth Banker Africa sat down with Dev Shetty, President and CEO of Fura Gems, about the companyâ&amp;#x20AC;&amp;#x2122;s expansion plans into the Mozambican precious stone market

As we are an earlystage mining company in Mozambique we have not got into full-fledged production yet. We are in the early stages of exploration. In July 2017, a systematic exploration method was employed over the whole area to get a better understanding of its primary and secondary ruby occurrences/potential. This work includes satellite image interpretation, lineament analysis, detailed lithological and structural mapping, and soil geochemical sampling. Based on the above studies and geological/geophysical and geomorphological interpretation, A series of potential exploration blocks (21) were identified and an Auger Drilling programme was initiated in these four licences in large grid pattern. The main idea of auger drilling is to get data on the depth and thickness of the gravel bed, the thickness of the over

burden and the basement geology. This will be followed by core drilling in areas where we encounter amphibolites rocks with primary mineralisation. This data will also help in identifying the areas for mining by bulk sampling which will determine the actual potential of the area.

What is the state of the regulatory landscape in the African countries in which you operate? We currently operate our exploration activities in Mozambique under the Mining Law 20/2014 of 18 August 2014 (the New Mining Law) that came into force in Mozambique on 22 August 2014. This replaced the previous mining regime under Mining Law 14/2002 that was put into place into 26 June 2002.

How important are mining activities to the African economy? I have seen first-hand just how important the mining sector can be to any host economy. At my previous role at

This issue of Banker Africa features Jean-Claude Bastos De Morais, Founder and Group CEO, Quantum Global. He discusses the growing Gulf-African trade corridor and what the economic landscape for investments will look like through 2018. 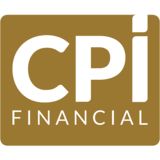