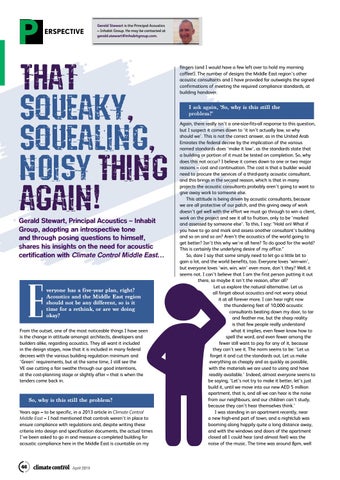 Gerald Stewart is the Principal Acoustics – Inhabit Group. He may be contacted at gerald.stewart@inhabitgroup.com.

Gerald Stewart, Principal Acoustics – Inhabit Group, adopting an introspective tone and through posing questions to himself, shares his insights on the need for acoustic certification with Climate Control Middle East…

veryone has a five-year plan, right? Acoustics and the Middle East region should not be any different, so is it time for a rethink, or are we doing okay?

From the outset, one of the most noticeable things I have seen is the change in attitude amongst architects, developers and builders alike, regarding acoustics. They all want it included in the design stages, now that it is included in many federal decrees with the various building regulation minimum and ‘Green’ requirements, but at the same time, I still see the VE axe cutting a fair swathe through our good intentions, at the cost-planning stage or slightly after – that is when the tenders come back in.

So, why is this still the problem? Years ago – to be specific, in a 2013 article in Climate Control Middle East – I had mentioned that controls weren’t in place to ensure compliance with regulations and, despite writing these criteria into design and specification documents, the actual times I’ve been asked to go in and measure a completed building for acoustic compliance here in the Middle East is countable on my

fingers (and I would have a few left over to hold my morning coffee!). The number of designs the Middle East region’s other acoustic consultants and I have provided far outweighs the signed confirmations of meeting the required compliance standards, at building handover.

I ask again, ‘So, why is this still the problem?’ Again, there really isn’t a one-size-fits-all response to this question, but I suspect it comes down to ‘it isn’t actually law, so why should we’. This is not the correct answer, as in the United Arab Emirates the federal decree by the implication of the various named standards does ‘make it law’, as the standards state that a building or portion of it must be tested on completion. So, why does this not occur? I believe it comes down to one or two major reasons – cost and continuation. The cost is that a builder would need to procure the services of a third-party acoustic consultant, and this brings in the second reason, which is that in many projects the acoustic consultants probably aren’t going to want to give away work to someone else. This attitude is being driven by acoustic consultants, because we are all protective of our patch, and this giving away of work doesn’t gel well with the effort we must go through to win a client, work on the project and see it all to fruition, only to be ‘marked and assessed by someone else’. To this, I say: “Hold on! What if you have to go and mark and assess another consultant’s building and so on and so on? Aren’t the acoustics of the world going to get better? Isn’t this why we’re all here? To do good for the world? This is certainly the underlying desire of my office.” So, dare I say that some simply need to let go a little bit to gain a lot, and the world benefits, too. Everyone loves ‘win-win’, but everyone loves ‘win, win, win’ even more, don’t they? Well, it seems not. I can’t believe that I am the first person putting it out there, so maybe it isn’t the reason, after all? Let us explore the natural alternative. Let us all forget about acoustics and not worry about it at all forever more. I can hear right now the thundering feet of 10,000 acoustic consultants beating down my door, to tar and feather me, but the sharp reality is that few people really understand what it implies, even fewer know how to spell the word, and even fewer among the fewer still want to pay for any of it, because they can’t see it. The norm seems to be: ‘Let us forget it and cut the standards out. Let us make everything as cheaply and as quickly as possible, with the materials we are used to using and have readily available.’ Indeed, almost everyone seems to be saying, ‘Let’s not try to make it better, let’s just build it, until we move into our new AED 5 million apartment, that is, and all we can hear is the noise from our neighbours, and our children can’t study, because they can’t hear themselves think.’ I was standing in an apartment recently, near a new high-end part of town, and a nightclub was booming along happily quite a long distance away, and with the windows and doors of the apartment closed all I could hear (and almost feel) was the noise of the music. The time was around 8pm, well 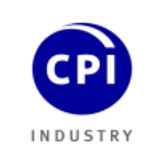