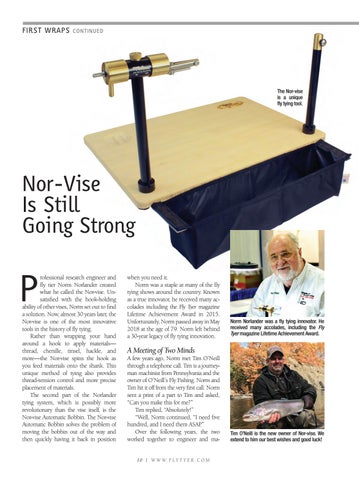 The Nor-vise is a unique fly tying tool.

rofessional research engineer and fly tier Norm Norlander created what he called the Nor-vise. Unsatisfied with the hook-holding ability of other vises, Norm set out to find a solution. Now, almost 30 years later, the Nor-vise is one of the most innovative tools in the history of fly tying. Rather than wrapping your hand around a hook to apply materials— thread, chenille, tinsel, hackle, and more—the Nor-vise spins the hook as you feed materials onto the shank. This unique method of tying also provides thread-tension control and more precise placement of materials. The second part of the Norlander tying system, which is possibly more revolutionary than the vise itself, is the Nor-vise Automatic Bobbin. The Nor-vise Automatic Bobbin solves the problem of moving the bobbin out of the way and then quickly having it back in position

when you need it. Norm was a staple at many of the fly tying shows around the country. Known as a true innovator, he received many accolades including the Fly Tyer magazine Lifetime Achievement Award in 2015. Unfortunately, Norm passed away in May 2018 at the age of 79. Norm left behind a 30-year legacy of fly tying innovation.

Norm Norlander was a fly tying innovator. He received many accolades, including the Fly Tyer magazine Lifetime Achievement Award.

A Meeting of Two Minds

A few years ago, Norm met Tim O’Neill through a telephone call. Tim is a journeyman machinist from Pennsylvania and the owner of O’Neill’s Fly Fishing. Norm and Tim hit it off from the very first call. Norm sent a print of a part to Tim and asked, “Can you make this for me?” Tim replied, “Absolutely!” “Well, Norm continued, “I need five hundred, and I need them ASAP.” Over the following years, the two worked together to engineer and ma-

Tim O’Neill is the new owner of Nor-vise. We extend to him our best wishes and good luck!