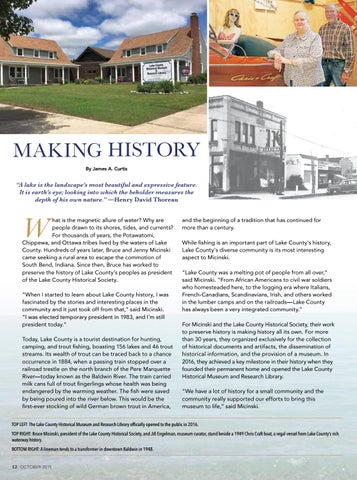 MAKING HISTORY By James A. Curtis

“A lake is the landscape’s most beautiful and expressive feature. It is earth’s eye; looking into which the beholder measures the depth of his own nature.” —Henry David Thoreau

hat is the magnetic allure of water? Why are people drawn to its shores, tides, and currents? For thousands of years, the Potawatomi, Chippewa, and Ottawa tribes lived by the waters of Lake County. Hundreds of years later, Bruce and Jenny Micinski came seeking a rural area to escape the commotion of South Bend, Indiana. Since then, Bruce has worked to preserve the history of Lake County’s peoples as president of the Lake County Historical Society. “When I started to learn about Lake County history, I was fascinated by the stories and interesting places in the community and it just took off from that,” said Micinski. “I was elected temporary president in 1983, and I’m still president today.” Today, Lake County is a tourist destination for hunting, camping, and trout fishing, boasting 156 lakes and 46 trout streams. Its wealth of trout can be traced back to a chance occurrence in 1884, when a passing train stopped over a railroad trestle on the north branch of the Pere Marquette River—today known as the Baldwin River. The train carried milk cans full of trout fingerlings whose health was being endangered by the warming weather. The fish were saved by being poured into the river below. This would be the first-ever stocking of wild German brown trout in America,

and the beginning of a tradition that has continued for more than a century. While fishing is an important part of Lake County’s history, Lake County’s diverse community is its most interesting aspect to Micinski. “Lake County was a melting pot of people from all over,” said Micinski. “From African Americans to civil war soldiers who homesteaded here, to the logging era where Italians, French-Canadians, Scandinavians, Irish, and others worked in the lumber camps and on the railroads—Lake County has always been a very integrated community.” For Micinski and the Lake County Historical Society, their work to preserve history is making history all its own. For more than 30 years, they organized exclusively for the collection of historical documents and artifacts, the dissemination of historical information, and the provision of a museum. In 2016, they achieved a key milestone in their history when they founded their permanent home and opened the Lake County Historical Museum and Research Library. “We have a lot of history for a small community and the community really supported our efforts to bring this museum to life,” said Micinski. 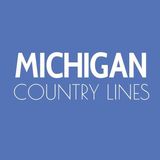