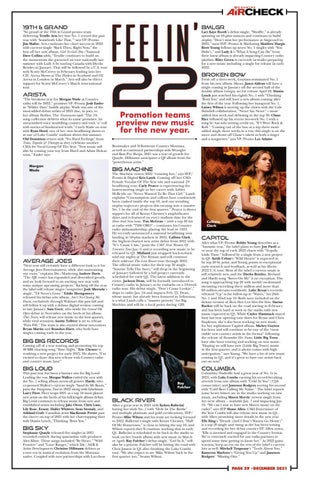 “So proud of the 19th &amp; Grand promo team delivering Tenille Arts her first No. 1 record this past year with ‘Somebody Like That,’” says VP/Promo Jim Malito. Arts continues her chart success in 2022 with current single “Back Then, Right Now,” the first off her new album, Girl To Girl. Dir./National Dave Collins adds, “Tenille continues to build on the momentum she garnered on tour nationally last summer with Lady A by touring Canada with Dierks Bentley in January. That will be followed by a U.S. tour with Scotty McCreery in February leading into her C2C Arena Shows at The Hydro in Scotland and O2 Arena in London in March.” Arts will also be direct support for Scotty McCreery’s March international tour.

Laci Kaye Booth’s debut single, “Shuffle,” is already spinning on 65-plus stations and continues to build airplay. “Don’t miss her performance at Stagecoach in 2022,” sayss SVP/Promo &amp; Marketing Matthew Hargis. Brett Young follows up seven No. 1 singles with “You Didn’t,” and Lady A’s “What A Song Can Do” from their latest album is already impacting Country radio playlists. Riley Green is currently in-studio preparing for a new music including a single for release in early 2022.

“The breakout year for Morgan Wade at Country radio will be 2022,” promises VP/Promo Josh Easler as “Wilder Days” builds airplay. Wade was one of the most-added debut artists of 2021 due, in part, to her album Reckless. The Tennessean said: “The 10song collection delivers what its name promises: An unvarnished voice straddling country and rock ‘n’ roll with stories of lionhearted truth.” Catch Wade on tour with Ryan Hurd, one of her own headlining shows or at one of Luke Combs’ stadium shows this summer. Old Dominion return with “No Hard Feelings” from Time, Tequila &amp; Therapy as they celebrate another CMA for Vocal Group Of The Year. “New music will also be coming your way from Hurd and Adam Doleac soon,” Easler says. Morgan Wade

Fresh off a three-week, Grammy-nominated No. 1 from his new album Macon, Jason Aldean will have a single coming in January off the second half of the double album Georgia, set for release April 22. Dustin Lynch just notched his eighth No. 1 with “Thinking ‘Bout You” and will have a new album coming after the first of the year. Following her inaugural No. 1, Lainey Wilson is moving up the charts with the Cole Swindell collaboration, “Never Say Never” – mostadded first week and debuting in the top 30. Chase Rice followed up his recent two-week No. 1 with a song he has solo writing credit on, “If I Were Rock &amp; Roll.” “Coming out of the box as a top three mostadded single three weeks in a row, this single is on the move and shows off Chase’s talent as both a singer and a songwriter,” says VP/Promo Lee Adams.

Bootmaker and Yellowstone Country Montana, as well as continued partnerships with Wrangler and Bass Pro Shops, 2021 was a year of growth for Quayle. Hillmann anticipates a Q2 album from the “powerhouse artist.”

The Machine enters 2022 “running hot,” says SVP/ Promo &amp; Digital Kris Lamb. Coming off her CMA Female Vocalist Of The Year win and national 29 headlining tour, Carly Pearce is experiencing the fastest-moving single in her career with Ashley McBryde on “Never Wanted To Be That Girl.” Lamb explains “Consumption and callout have consistently been ranked inside the top 10, and our trending airplay trajectory projects this turning into a massive No. 1 by the end of the first quarter.” Pearce is direct support for all of Kenny Chesney’s amphitheater dates and is featured on every stadium date for the Here And Now tour. Tim McGraw – with a top 30 hit at radio with “7500 OBO” – continues his Country radio ambassadorship, playing the lead in 1883. He recently announced a national headlining tour landing in 30-plus markets in 2022. Callista Clark, the highest-charted new artist debut from 2021 with “It’s ‘Cause I Am,” joins the CMT Next Women Of Country Tour Jan. 6 and is recording new music to be released in Q1. Midland just wrapped back-to-back sold out nights at The Ryman and will continue their sold-out The Last Resort tour through 2022. The official music video for their top 50 single, “Sunrise Tells The Story,” will drop in the beginning of January followed by a full project currently scheduled for early Q2. The latest addition to the roster, Jackson Dean, will be formally introduced to Country radio in January as he embarks on a 10-week radio tour. His debut single, “Don’t Come Lookin’,” ships to radio Jan. 24 and impacts Feb. 22. Dean, whose music has already been featured in Yellowstone, is a what Lamb calls a “massive priority” for Big Machine and will be a focal point during CRS.

Coming off of a year touring and promoting his top 40 BBI charting song “Date Night,” Eric Chesser is readying a new project for early 2022. He shares, “I’m excited to share this new release with Country radio and country music fans!”

After what VP/Promo Bobby Young describes as a “fantastic year,” the label plans to have Jon Pardi at or near the top of early 2022 charts with “Tequila Little Time,” followed by a single from a new project in Q1. Keith Urban’s “Wild Hearts” is expected to be top 20 by print, and Young points to exceptional early research and feedback, as well as his 48-city 2022 U.S. tour. Most of the label’s current music is still relatively new, and the Dierks Bentley, Breland and Hardy song “Beers On Me” is no exception. The song is approaching top 20 with weekly on-demand streaming exceeding three million and more than 60 million streams worldwide. Luke Bryan’s recentlyreleased “Up” is the follow-up to “Waves,” his 26th No. 1 and 32nd top 10. Both were included on the deluxe version of Born Here Live Here Die Here. Darius Rucker will be back on the road starting in February and has been hard at work in the studio with new music expected in Q1. While Caylee Hammack stayed busy last year opening tour dates for Bryan and Chris Stapleton, she’s also been working on new music for her sophomore Capitol album. Mickey Guyton has been and will continue to be one of the “most visible new country artists in the format” following the release of Remember Her Name. Little Big Town have also been touring and working on new music. “Hoping we will have new [Little Big Town] music in the first quarter, and it always comes with high anticipation,” says Young. “We have a lot of new music coming in Q1, and it’s great to have our artists back out on tour!”

“Next year will certainly have a different look to it for Average Joes Entertainment, while also maintaining our roots,” explains Dir./Marketing Andrew Davis. “The AJE roster has expanded and diversified greatly, and we look forward to an exciting new year with some unique upcoming projects.” Kicking off the year, the label will release singer/songwriter Josh Mirenda’s single, “Til Neon’s Gone.” Eddie Montgomery released his debut solo album, Ain’t No Closing Me Down, exclusively through Walmart this past fall and will follow it up with a deluxe digital version coming in late January. Sam Grow, who made his Grand Ole Opry debut in November on the heels of his album This Town, will release new music in the first quarter, while viral sensation Austin Tolliver is set to release “Pain Pill.” The team is also excited about newcomers Bryan Martin and Brandon Hartt, who both have singles coming early in the year.

This past year has been a banner one for Big Loud. Leading the way, Morgan Wallen ended the year with the No. 1 selling album across all genres. Hardy, who co-penned Wallen’s current single “Sand In My Boots,” joins the Dangerous Tour in 2022 along with labelmate Larry Fleet. Fleet wraps 2021 as a top 10 most played new artist on the heels of his full-length album debut. Big Loud continues to release music from new and established artists including Jake Owen, Chris Lane, Lily Rose, Ernest, Hailey Whitters, Sean Stemaly, and Ashland Craft. Canadian artist MacKenzie Porter puts the cherry on top of 2021 with her chart-topping duet with Dustin Lynch, “Thinking ‘Bout You.”

After a great year in 2021 with Kelsea Ballerini having her sixth No. 1 with “Hole In The Bottle” and multiple platinum and gold certifications, SVP/ Promo Mike Wilson and his team are looking forward to 2022. Ballerini’s single with Kenny Chesney, “Half Of My Hometown,” is close to hitting the top 10, and Wilson reports they’ll continue working that in early Q1. Ballerini is scheduled to be back in the studio to work on her fourth album with new music in March or April. Ray Fulcher’s debut single, “Girl In It,” will also be a priority. Fulcher will be hitting the road with Chris Janson in Q1 after finishing the Luke Combs tour. “We also expect to see Mike Wilson back in the first quarter too,” beams Wilson.

Columbia/Nashville had a great year of No. 1s in 2021, with Luke Combs earning his record-breaking seventh from one album with “Cold As You” (12th consecutive) and Jameson Rodgers scoring his second with “Cold Beer Calling My Name.” The label reports some heavy hitters are in the studio working on new music, including Maren Morris’ newest single from her next album – available Jan. 7 and impacting Jan. 10. “We can’t wait to have new Maren music on the radio!” says SVP Shane Allen. CMA Entertainer of the Year Combs will also release new music in Q1, with Allen promising more details in the new year. Elle King’s “Drunk (And I Don’t Wanna Go Home)” is a top 20 single and rising as she has been writing and recording for her debut country EP. Allen notes, “Elle is invested and engaged in the Country format. We’re extremely excited for our radio partners to spend some time getting to know her.” As 2022 gains traction, keep an eye on the rest of the label’s current hits as well: Mitchell Tenpenny’s “Truth About You,” Kameron Marlowe’s “Giving You Up” and Jameson Rodgers’ “Missing One.”