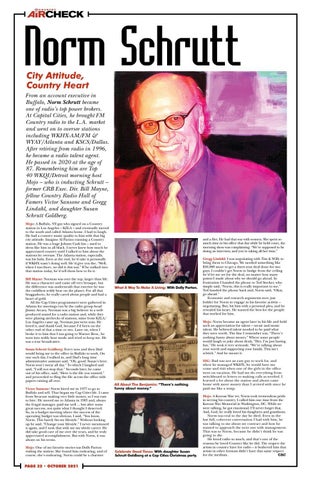 From an account executive in Buffalo, Norm Schrutt became one of radio’s top power brokers. At Capital Cities, he brought FM Country radio to the L.A. market and went on to oversee stations including WKHX-AM/FM &amp; WYAY/Atlanta and KSCS/Dallas. After retiring from radio in 1996, he became a radio talent agent. He passed in 2020 at the age of 87. Remembering him are Top 40 WKQI/Detroit morning host Mojo – who is inducting Schrutt – former CRB Exec. Dir. Bill Mayne, fellow Country Radio Hall of Famers Victor Sansone and Gregg Lindahl, and daughter Susan Schrutt Goldberg. Mojo: A Buffalo, NY guy who signed on a Country station in Los Angeles – KZLA – and eventually moved to the south and called Atlanta home. I had to laugh. He had a country music quality to him with that big city attitude. Imagine Al Pacino running a Country station. He was a huge Johnny Cash fan – used to dress like him in all black. I never knew how much he appreciated country until I talked to him about the stations he oversaw. The Atlanta station, especially, was his baby. Even at the end, he’d take it personally if WKHX wasn’t doing well. He’d give you the, “Well, when I was there, we did it this way.” If he walked into that station today, he’d tell them how to fix it. Bill Mayne: Norman was over the top, larger than life. He was a character and came off very brusque, but the difference was underneath that exterior he was the cuddliest teddy bear on the planet. For all that braggadocio, he really cared about people and had a heart of gold. All the Cap Cities programmers were gathered in Atlanta for meetings run by the radio group head Jimmy Arcara. Norman was a big believer in a wellproduced sound for a radio station and, while they were playing airchecks of stations, mine from KZLA/ Los Angeles came up. Norman just went nuts. He loved it, and thank God, because I’d been on the other end of that a time or two. Later on, when I broke it to him that I was going to Warner Bros., he went into teddy bear mode and tried to keep me. He was a true broadcaster. Susan Schrutt Goldberg: Every now and then Dad would bring me to the office in Buffalo to work. On one such day, I walked in, and Dad’s long time administrative assistant said, “Oh, good. Susan’s here. Norm won’t swear all day.” To which I laughed and said, “I will not stop that.” Seconds later, he came out of his office, said, “Here is the file you wanted,” and proceeded to fling the file across the office with papers raining all over. Victor Sansone: Norm hired me in 1977 to go to Buffalo and sell. That began my Cap Cities life. I came from Syracuse making very little money, so I was easy to hire. He moved me to Atlanta in 1983 and, always the frugal manager, paid me well ... but after some great success, not quite what I thought I deserved. So, in a budget meeting where the success of the operating budget was obvious, I said, “You know, Norm. This barely fits my lifestyle.” Without looking up he said, “Change your lifestyle.” I never mentioned it again, and I took that with me my whole career. He did take good care of me over the years, and he truly appreciated accomplishment. But with Norm, it was always on his terms. Mojo: One of my favorite stories was Dolly Parton visiting the station. She found him endearing, and of course, she’s endearing. Norm could be a charmer

and a flirt. He had that way with women. She spent so much time in his office that day while he held court, the morning show was complaining: “We’re supposed to be doing an interview, and you’re taking all her time.”

What A Way To Make A Living: With Dolly Parton.

Gregg Lindahl: I was negotiating with Tim &amp; Willy to bring them to Chicago. We needed something like $50,000 more to get a three-year deal done for two guys. I couldn’t get Norm to budge from the ceiling he’d let me set for the deal, no matter how many points I made about why we should go ahead. In frustration I handed the phone to Ted Stecker, who simply said, “Norm, this is really important to me.” Ted handed the phone back and, Norm said, “Okay, go ahead.” Economic and research arguments were just fodder for Norm to engage in his favorite activity – negotiating. But, hit him with a personal plea, and he revealed his heart. He wanted the best for the people that worked for him. Mojo: Norm became an agent later in his life and held such an appreciation for talent – on-air and music talent. He believed talent needed to be paid what they were worth. The line I remember was, “There’s nothing funny about money.” Where some people would laugh or joke about deals, “Hey, I’m just having fun.” He took it very seriously. “We’re talking about your worth and supporting your family. This isn’t schtick.” And he meant it.

All About The Benjamin: “There’s nothing funny about money.”

SSG: Dad was not an easy guy to work for, and when he managed WKHX, he would have me come and visit when one of the girls in the office went on vacation. He had me do everything from switchboard to letters to making calls as needed. I learned a lot about the station and always came home with more money than I arrived with since he paid me like a temp.

Mojo: A Korean War vet, Norm took tremendous pride in serving his country. I called him one time from the Korean War Memorial in Washington, DC. While we were talking, he got emotional. I’ll never forget that. And, God, he really loved his daughters and grandsons. Norm was real to the day he died. Even in the last full, coherent conversation I had with him, he was talking to me about my contract and how he wanted to approach the next one with management. That was so Norm, because he didn’t think he was going to die. He loved radio so much, and that’s one of the reasons he loved Country like he did. The respect the artists in country have for radio – it bothered him that artists in other formats didn’t have that same respect for the medium. CAC