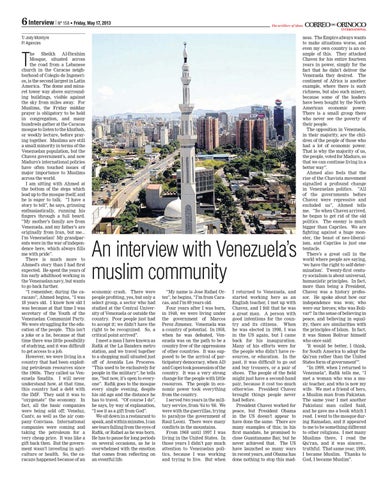 The artillery of ideas

he Sheikh Al-Ibrahim Mosque, situated across the road from a Lebanese church in the Caracas neighborhood of Colegio de Ingenerios, is the second largest in Latin America. The dome and minaret tower way above surrounding buildings, visible against the sky from miles away. For Muslims, the Friday midday prayer is obligatory to be held in congregation, and many hundreds gather at the Caracas mosque to listen to the khutbah, or weekly lecture, before praying together. Muslims are still a small minority in terms of the Venezuelan population, but the Chavez government’s, and now Maduro’s international policies have often touched issues of major importance to Muslims across the world. I am sitting with Ahmed at the bottom of the steps which lead up to the mosque itself, and he is eager to talk. “I have a story to tell”, he says, grinning enthusiastically, running his ﬁngers through a full beard. “My mother’s family are from Venezuela, and my father’s are originally from Iran, but me... I’m Venezuelan! My grandparents were in the war of independence here, which always ﬁlls me with pride”. There is much more to Ahmed’s story than I had ﬁrst expected. He spent the years of his early adulthood working in the Venezuelan navy, but wants to go back further. “I remember, during the caracazo”, Ahmed begins, “I was 18 years old. I know how old I was because at that time I was secretary of the Youth of the Venezuelan Communist Party. We were struggling for the education of the people. This isn’t a joke or a lie, because at that time there was little possibility of studying, and it was difﬁcult to get access to a job. However, we were living in a country that had been exploiting petroleum resources since the 1960s. They called us Venezuela Saudita. I will never understand how, at that time, this country had a debt with the IMF. They said it was to “oxygenate” the economy. In fact, all the basic companies were being sold off; Veneluz, Cantv, as well as the air company Conviasa. International companies were coming and taking the petroleum for a very cheap price. It was like a gift back then. But the government wasn’t investing in agriculture or health. So, the caracazo happened because of an

An interview with Venezuela’s muslim community economic crash. There were people proﬁting, yes, but only a select group, a sector who had studied at the Central University of Venezuela or outside the country. Poor people just had to accept it; we didn’t have the right to be recognized. So, a critical point arrived”. I meet a man I have known as Raﬁk at the La Bandera metro station, and we travel together to a shopping mall situated just off of Avenida Los Proceres. “This used to be exclusively for people in the military”, he tells me, “but now, it’s open to everyone”. Raﬁk goes to the mosque every single evening, despite his old age and the distance he has to travel. “Of course I do”, he says, by way of explanation, “I see it as a gift from God”. We sit down in a restaurant to speak, and within minutes, I can see tears falling from the eyes of Raﬁk, or Rafael as he was born. He has to pause for long periods on several occasions, as he is overwhelmed with the emotion that comes from reﬂecting on an eventful life.

“My name is Jose Rafael Ortez”, he begins, “I’m from Caracas, and I’m 69 years old. Four years after I was born, in 1948, we were living under the government of Marcos Perez Jimenez. Venezuela was a country of potential. In 1958, when he was defeated, Venezuela was on the path to be a country free of the oppressions of other countries. It was supposed to be the arrival of participatory democracy, when AD and Copei took possession of the country. It was a very strong change for the people with little resources. The people in economic power took everything from the country. I served two years in the military service, from ’64 to ’66. We were with the guerrillas, trying to paralyze the government of Raul Leoni. There were many conﬂicts in the mountains. From 1968 until 1997 I was living in the United States. In those years I didn’t pay much attention to Venezuelan politics, because I was working and trying to live. But when

I returned to Venezuela, and started working here as an English teacher, I met up with Chavez, and I felt that he was a great man. A person with good intentions for the country and its citizens. When he was elected in 1998, I was in the US again, but I came back for his inauguration. Many of his efforts were for the people who didn’t have resources, or education. In the past, it was difﬁcult to go out and buy trousers, or a pair of shoes. The people of the ﬁeld might just have a second-hand pair, because it cost too much otherwise. President Chavez brought things people never had before. President Chavez worked for peace, but President Obama in the US doesn’t appear to have done the same. There are many examples of this; in his ﬁrst mandate, he promised to close Guantanamo Bay, but he never achieved that. The US have launched so many wars in recent years, and Obama has done nothing to stop this mad-

ness. The Empire always wants to make situations worse, and even my own country is an example of this. They attacked Chavez for his entire fourteen years in power, simply for the fact that he didn’t deliver the Venezuela they desired. The continent of Africa is another example, where there is such richness, but also such misery, because some of the leaders have been bought by the North American economic power. There is a small group there who never see the poverty of their people. The opposition in Venezuela, in their majority, are the children of the people of those who had a lot of economic power. That is why the majority of us, the people, voted for Maduro, so that we can continue living in a better way”. Ahmed also feels that the rise of the Chavista movement signalled a profound change in Venezuelan politics. “All of the governments before Chavez were repressive and excluded us”, Ahmed tells me. “So when Chavez arrived, he began to get rid of the old politics. The enemy is much bigger than Capriles. We are ﬁghting against a huge monster, the beast of neo-liberalism, and Capriles is just one tentacle. There’s a great call in the world where people are saying, ‘we have the right to self-determination’. Twenty-ﬁrst century socialism is about universal, humanistic principles. In fact, more than being a President, Chavez was a history professor. He spoke about how our independence was won; who were our heroes; who was Bolivar? In the sense of believing in peace, and believing in equality, there are similarities with the principles of Islam. In fact, it was Simon Bolivar himself who once said: ‘It would be better, I think, for South America to adopt the Qu’ran rather than the United States form of government’”. “In 1999, when I returned to Venezuela”, Raﬁk tells me, “I met a woman who was a music teacher, and who is now my wife. We met a friend of hers, a Muslim man from Pakistan. The same year I met another Pakistani man called Said, and he gave me a book which I read. I went to the mosque during Ramadan, and it appeared to me to be something different to other religions. I met many Muslims there, I read the Qu’ran, and it was sincere... truthful. That same year, 1999, I became Muslim. Thanks to God, I became Muslim”.

Nicolas Maduro: a President for the workers 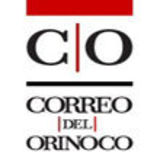