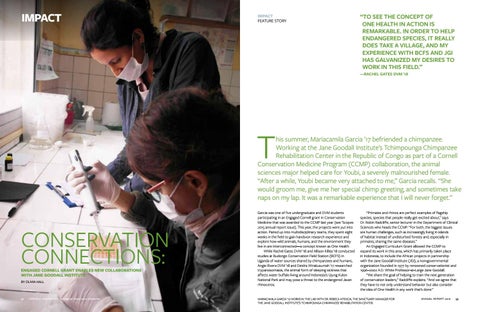 “TO SEE THE CONCEPT OF ONE HEALTH IN ACTION IS REMARKABLE. IN ORDER TO HELP ENDANGERED SPECIES, IT REALLY DOES TAKE A VILLAGE, AND MY EXPERIENCE WITH BCFS AND JGI HAS GALVANIZED MY DESIRES TO WORK IN THIS FIELD.” —RACHEL GATES DVM ’18

his summer, Mariacamila Garcia ’17 befriended a chimpanzee. Working at the Jane Goodall Institute’s Tchimpounga Chimpanzee Rehabilitation Center in the Republic of Congo as part of a Cornell Conservation Medicine Program (CCMP) collaboration, the animal sciences major helped care for Youbi, a severely malnourished female. “After a while, Youbi became very attached to me,” Garcia recalls. “She would groom me, give me her special chimp greeting, and sometimes take naps on my lap. It was a remarkable experience that I will never forget.”

Garcia was one of five undergraduate and DVM students participating in an Engaged Cornell grant in Conservation Medicine that was awarded to the CCMP last year (see ’Scopes 2015 annual report issue). This year, the projects were put into action. Paired up into multidisciplinary teams, they spent eight weeks in the field to gain hands-on research experience and explore how wild animals, humans, and the environment they live in are interconnected—a concept known as One Health. While Rachel Gates DVM ’18 and Allison Killea ’18 conducted studies at Budongo Conservation Field Station (BCFS) in Uganda of water sources shared by chimpanzees and humans, Angie Rivera DVM ’18 and Deidra Wirakusumah ’17 researched trypanosomiasis, the animal form of sleeping sickness that affects water buffalo living around Indonesia’s Ujung Kulon National Park and may pose a threat to the endangered Javan rhinoceros.

“Primates and rhinos are perfect examples of flagship species, species that people really get excited about,” says Dr. Robin Radcliffe, senior lecturer in the Department of Clinical Sciences who heads the CCMP. “For both, the biggest issues are human challenges, such as increasingly living in islands of habitat instead of undisturbed forests and, especially in primates, sharing the same diseases.” An Engaged Curriculum Grant allowed the CCMP to expand its work in this area, which has primarily taken place in Indonesia, to include the African projects in partnership with the Jane Goodall Institute (JGI), a non-governmental organization founded in 1977 by renowned conservationist and 1996–2002 A.D. White Professor-at-Large Jane Goodall. “We share the goal of helping to train the next generation of conservation leaders,” Radcliffe explains. “And we agree that they have to not only understand behavior but also consider the idea of One Health in any work that’s done.”

Expanded annual report edition: From stethoscopes to microscopes to the scope of the College, 'Scopes is your source for news from the College of Veterinary Medicine at Cornell University.