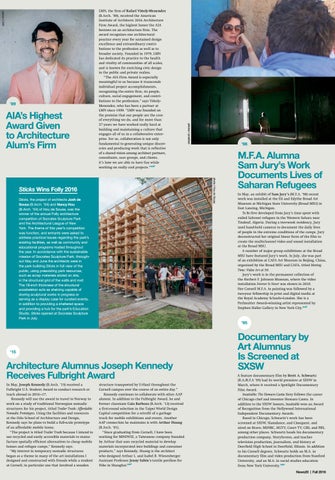 LMN, the firm of Rafael Viñoly-Menendez (B.Arch. ’89), received the American Institute of Architects 2016 Architecture Firm Award, the highest honor the AIA bestows on an architecture firm. The award recognizes one architectural practice every year for sustained design excellence and extraordinary contributions to the profession as well as to broader society. Founded in 1979, LMN has dedicated its practice to the health and vitality of communities of all scales, and is known for enriching civic design in the public and private realms. “The AIA Firm Award is especially meaningful to us because it transcends individual project accomplishments, recognizing the entire firm, its people, culture, social engagement, and contributions to the profession,” says ViñolyMenendez, who has been a partner at LMN since 1999. “LMN was founded on the premise that our people are the core of everything we do, and for more than 37 years we have worked really hard at building and maintaining a culture that engages all of us in a collaborative enterprise. For us, collaboration is not only fundamental to generating unique discoveries and producing work that is reflective of a shared vision among architect partners, consultants, user groups, and clients, it’s how we are able to have fun while working on really cool projects.”AAP

Sticks Wins Folly 2016 Sticks, the project of architects Josh de Sousa (B.Arch. ’04) and Nancy Hou (B.Arch. ’04) of Hou de Sousa, was the winner of the annual Folly architecture competition of Socrates Sculpture Park and the Architectural League of New York. The theme of this year’s competition was function, and entrants were asked to address practical issues regarding the park’s existing facilities, as well as community and educational programs hosted throughout the year. In accordance with the sustainable mission of Socrates Sculpture Park, throughout May and June the architects were in the park building Sticks in full view of the public, using preexisting park resources, such as scrap materials stored on site, in the structural grid of the walls and roof. The 18-inch thickness of the structural exoskeleton acts as shelving capable of storing sculptural works in progress or serving as a display case for curated events, in addition to providing a sheltered space and providing a hub for the park’s Education Studio. Sticks opened at Socrates Sculpture Park in July.

M.F.A. Alumna Sam Jury’s Work Documents Lives of Saharan Refugees In May, an exhibit of Sam Jury’s (M.F.A. ’98) recent work was installed at the Eli and Edythe Broad Art Museum at Michigan State University (Broad MSU) in East Lansing, Michigan. To Be Here developed from Jury’s time spent with exiled Sahrawi refugees in the Western Sahara near Tindouf, Algeria. During a two-week residency, Jury used hand-held cameras to document the daily lives of people in the extreme conditions of the camps. Jury deconstructed her original linear form of the film to create the multichannel video and sound installation at the Broad MSU. A number of major group exhibitions at the Broad MSU have featured Jury’s work. In July, she was part of an exhibition at CAFA Art Museum in Beijing, China, organized by the Broad MSU and CAFA, titled Moving Time: Video Art at 50. Jury’s work is in the permanent collection of the Herbert F. Johnson Museum, where the video installation Forever Is Never was shown in 2010. Her Cornell M.F.A. in painting was followed by a two-year fellowship in print and digital media at the Royal Academy Schools–London. She is a Perlmutter Award–winning artist represented by Stephen Haller Gallery in New York City.AAP

Architecture Alumnus Joseph Kennedy Receives Fulbright Award In May, Joseph Kennedy (B.Arch. ’15) received a Fulbright U.S. Student Award to conduct research or teach abroad in 2016 –17. Kennedy will use the award to travel to Norway to work on a study of traditional Norwegian nomadic structures for his project, titled Trailer Trash: Affordable Nomadic Prototypes. Using the facilities and resources at the Oslo School of Architecture and Design, Kennedy says he plans to build a full-scale prototype of an affordable mobile home. “The project is titled Trailer Trash because I intend to use recycled and easily accessible materials to manufacture spatially efficient alternatives to cheap mobile homes and refugee camps,” Kennedy says. “My interest in temporary nomadic structures began as a theme in many of the art installations I designed and constructed with friends while a student at Cornell, in particular one that involved a wooden

structure transported by U-Haul throughout the Cornell campus over the course of an entire day.” Kennedy continues to collaborate with other AAP alumni. In addition to the Fulbright Award, he and former classmate Caio Barboza (B.Arch. ’13) received a first-round selection in the Taipei World Design Capital competition for a retrofit of a garbage truck for mobile exhibitions and events. Another AAP connection he maintains is with Arthur Huang (B.Arch. ’01). “Since graduating from Cornell, I have been working for MINIWIZ, a Taiwanese company founded by Arthur that uses recycled material to develop materials incorporated into buildings and consumer products,” says Kennedy. Huang is the architect who designed Arthur L. and Isabel B. Wiesenberger Assistant Professor Jenny Sabin’s textile pavilion for Nike in Shanghai.AAP

Documentary by Art Alumnus Is Screened at SXSW A feature documentary film by Brett A. Schwartz (B.A./B.F.A ’95) had its world premiere at SXSW in March, where it received a Spotlight Documentary Film Award. Insatiable: The Homaro Cantu Story follows the career of Chicago chef and inventor Homaro Cantu. In addition to the SXSW honors, Insatiable won an Award of Recognition from the Hollywood International Independent Documentary Awards. Based in Chicago, Schwartz’s work has been screened at SXSW, Slamdance, and Cinequest, and aired on Bravo, MSNBC, HGTV, Court TV, CBS, and PBS, among other places. Schwartz heads his documentary production company, StoryScreen, and teaches television production, journalism, and history at Deerfield High School in Deerfield, Illinois. In addition to his Cornell degrees, Schwartz holds an M.A. in documentary film and video production from Stanford University, and an M.A. in social studies education from New York University.AAP News20 | Fall 2016

The fall 2016 issue of AAP News, the magazine of Cornell University's College of Architecture, Art, and Planning. 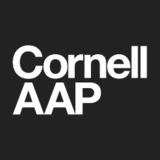